Swiss architect Gus Wüstemann has subdivided a 19th-century building in Zurich into nine flats with concrete and chipboard finishes that complement its existing vaulted ceilings and stone walls.

Located in the Seefeld area of the Swiss city, the original building consists of two structures: a traditional four-storey residential house dating from 1850 and an extension in front, which was built later to host a car repair garage and warehouse.

The city council has recently protected the outlines of the entire complex, so Wüstemann had to work inside the existing walls. He stripped the interior plasterwork to reveal an existing stone wall that features throughout the renovation, named Natural Stone Wall.

"The historic, massive stone walls were the starting point for applying new contemporary forms of living," said Wüstemann. "The wall was freed of its covering layers and we organised the space and programme in reference to the wall."

The five apartments occupying the townhouse feature open-plan living areas designed around the stone wall, which is complemented by a series of "raw" material choices.

These include a series of built-in concrete furniture, like the kitchen islands and the bathroom washbasin, and wooden windows that are mounted directly onto the slabs.

"The residential programme was laid out in the centre of the space, creating programme niches, always in a dialogue with the natural stone wall, without touching or contaminating it," said the architect.

"A fluent plan like a promenade helped to reach an endless space, instead of an addition of small spaces."

Concrete flooring is used throughout. Some parts have been cast over engineered wooden boards to give a textured finish – a technique the architect also used for an apartment block in Zurich.

"In the workshops we answered to the large natural stone arches with a topography of concrete – a contemporary response to a strong historical element," the architect explained.

One of the Ateliers is arranged across three floors and features a large window placed into an original archway that brings plenty of light into the open-plan living area.

In this space, the end of the existing stone wall marks a division between the lounge at the front, and the kitchen and dining room at the rear.

Off the dining area, chipboard doors slide open to reveal a bathroom, which features a high vaulted ceiling and a bathtub sunken into the floor. The free-standing shower is placed in front of a large polycarbonate light box that provides a diffuse light.

From the living area, a staircase leads up and around a mezzanine floor occupied by the study area. The master bedroom is placed above this on a second, smaller level, with doors that open to a terrace.

The ground floor of the second Atelier features a similarly open-plan layout, with the kitchen and dining room occupying one side of the space.

On the other side, the lounge is lit from above by a skylight in the roof. The space remains open to the bathroom, which is set on a slightly higher level and accessed by a set of steps.

A staircase running along a stone wall leads up to the bedroom and en-suite bathroom.

Wüstemann's studio has offices in Barcelona and Zurich. His other projects include a house in Spain with a largely windowless exterior and a home and poolhouse with walls of concrete, oak and travertine. 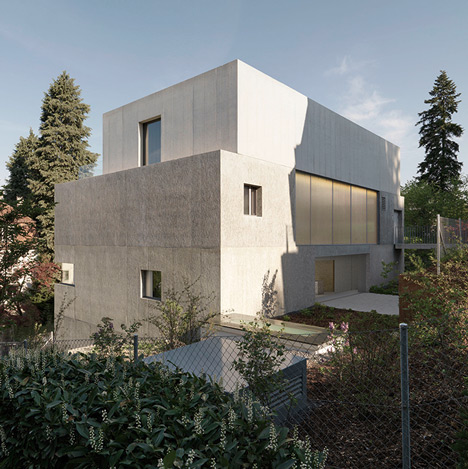 Photography is by Bruno Helbling.