The site for this residence in the Canadian Rocky Mountains was chosen by Cutler Anderson Architects for its craggy topography, which the designers used to frame the house.

The home, dubbed Rock House, is an 800-square-foot (75-square-metre) cabin that includes a single bedroom. It was designed as a prototype unit for a larger development in Western Alberta.

Consequently, the architects personally chose the building's site and elected to position it between two massive boulders, which provide a backdrop for the daily life of its inhabitants.

"The project was designed to show that small, well-built buildings are both appropriate and functional, and capable of being fit into the natural world with a minimum of impact on living systems," said the Seattle-based studio.

Residents access the home through a board-formed concrete wall that marks the entrance and was designed to hide the views beyond it.

This contrasts with the interior, illuminated by floor-to-ceiling glass walls that provide panoramic views of the rugged scenery.

"This choreography amplifies the impact of both the distant and intimate views," said the architects.

The home is formed by two volumes. The concrete volume houses utility spaces, while living areas are located in the glass-clad portion of the home.

"This use of contrasting textures was a further attempt to 'open up' the building to its physical context," the firm explained.

The expansive living room is covered by a high ceiling of exposed wooden beams that form the structure of the roof. It is immediately adjacent to an open-plan kitchen that enjoys the same sweeping views.

"Because this cabin is about its relationship to the land, each facade has glazing and is carefully cut into the rock," the firm explained.

Interior finishes include Douglas Fir, steel, and a polished concrete floor throughout. At night, artificial lighting between the ceiling's wooden beams give the home a glowing appearance from outside.

Other homes that are similarly influenced by rocky landscape features include a house in Wyoming built around a giant boulder and a forest retreat in Bohemia that rests upon a large rock.

Photography is by Bent René Synnevåg. 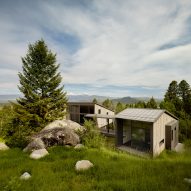