Canadian studio Omar Gandhi Architect has created a remote vacation home in Nova Scotia for an urban couple, with floor-to-ceiling windows that provide sweeping views of the sea.

The residence, called Lookout at Broad Cove Marsh, is located on Cape Breton Island, on the outskirts of the coastal village of Inverness. The area is a popular destination for tourists, who are drawn to its scenic golf courses, sandy beaches and steep cliffs.

Accessed via a country road, the holiday dwelling is situated on a long sliver of land that overlooks the Gulf of St Lawrence.

It was designed for a married couple from Toronto who have three grown children and wanted a place where their family could come together.

The home consists of a low-lying bar made of concrete, wood and glass.

"The seasonal residence is defined by a single-loaded corridor running parallel to the length of the property, with a series of open and private spaces overlooking the ocean cliff," said Omar Gandhi Architect, a studio founded in 2010 that has offices in Halifax and Toronto.

The southwest facade, which looks toward the sea, features vast expanses of glass offering panoramic views. Three boxy protrusions – clad in white-washed spruce boards that were locally sourced – denote the placement of bedrooms within the home.

The rear elevation features a retaining wall made of exposed concrete, and above it, a band of glazing that brings in natural light.

"The long strip of clerestory sitting atop the retaining wall allows a continuous run of gentle north-east light to peer in," the architect described.

The cabin is topped with a simple roof that sits over the building "like a low-slung hat". Its horizontality draws reference to the vast sea, while its overhangs help shield the interiors from the intense summer sun.

"Atop the kitchen, a portion of the roof lifts up like an open cassette deck to allow more light to trickle in, moderated by a low-tech wood brise-soleil," the team added.

Inside, the home is split into distinct public and private zones.

One half contains a large room that contains areas for cooking, eating and relaxing. The space is anchored by an 18-foot-long (5.4-metre) island for food preparation and dining.

The other portion of the residence contains three bedrooms and bathrooms.

Stretching through the cabin is a continuous millwork unit that functions as a wall. Measuring 48 feet (14 metres) in length, the wall extends to the outdoors, slipping "seamlessly from exterior to interior".

Other projects by Omar Gandhi Architect include a tall, timber-clad home with a steep gabled roof and a wooden cabin for two artists that appears to climb up a hill. 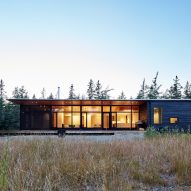