The steeply pitched roof of this shingled chapel by Bernardo Bader Architects provides a dramatic worship space, which narrows towards a small window facing a grassy hillside in western Austria.

The Dornbirn-based practice designed Chapel Salgenreute for a spot next to the Krumbacher moor in Austria's Vorarlberg state. It replaces an old chapel that had occupied the site for 200 years.

Set on a stone base, the chapel is clad entirely in wood, which is intended to grey as it weathers – like the traditional buildings nearby.

"The sun is going to change the wooden facade – it will turn darker, black in the south, silver-grey in the north, just like the old farmhouses from the area,"  said the architects.

The architects based the layout of the spaces inside the chapel, including an apse, on the old building, while the steeply pitched roof is intended as a contemporary update.

The internal walls, floors and ceiling are all covered in the same light wood, which provides a dramatic roof above the minimal church pews, which are also made from pale timber.

"The shape of the room is new – an outstanding steep rising spatial folding made out of wood," said the architects. "The inside of the chapel is dominated by the homogeneous material of the wall and the roof."

A large metal door recessed at the front of the building opens to the main church hall.

The rows of benches face towards the white altar and the window behind, which frames the branches of s large tree.

"The view straight ahead through the white apse leads directly into the nature," said the architects. "Whoever enters the chapel leaves the solid ground and proceeds a reflective journey."

The statue of the virgin Mary, which originated from the existing building, is placed at the side of the apse.

Other projects by Bernardo Bader Architects in Austria include a timber-clad chalet, which is also based on the traditional farmhouse, and an Islamic cemetery with red concrete walls. 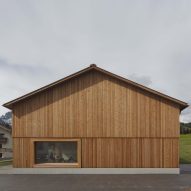