This drone, designed for hard-to-reach disaster areas, will soon be getting an upgrade that allows it to be consumed along with its cargo.

Its wooden framework is made from sustainable sources, but within 12 months Gifford's company – Windhorse Aerospace – hopes to replace this structure with edible food components.

"We wanted to make something that is the ultimate useable package delivery system for aid and disaster scenarios that could go where traditional methods can't due to damaged infrastructure, and solves multiple issues that have previously cost lives," said Gifford.

The Pouncer will come in three sizes. The Mark 1 can carry 20 kilograms of aid, the Mark 2 takes 50 kilograms, and the Mark 3 is capable of delivering 100 kilograms.

The drone would be launched from a catapult, balloon or aircraft depending on the area it is trying to reach.

If being dropped from an aircraft, the drone can launch from up to 35 kilometres away to reduce risk for the plane and crew. According to the company, the drop would be as accurate as seven metres from the target.

"The aim of Pouncer is to overcome challenges currently being experienced by teams operating in various disaster situations through the use of a single aerial vehicle," said Gifford. 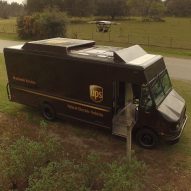 Gifford, a Somerset-based engineer, previously designed a high-altitude drone named Aquila, which could be used to beam internet or mobile-phone connectivity to dead areas.

Architects and designers are increasingly focusing on problems facing those in disaster-stricken and developing countries, particularly in the wake of the ongoing refugee crisis.

In a similar vein to the Pouncer drone, automotive engineer Gordon Murray created the OX truck, which aims to provide remote parts of Africa and the developing world with transport and aid for both everyday living and emergencies.