British designer Lee Broom is celebrating his studio's 10th anniversary with a brutalism-inspired grandfather clock, which he will launch during this year's Milan design week.

The Time Machine grandfather clock is made from a monolithic block of Carrara marble – a material the designer's studio has become known for over the past decade.

It will be produced in a limited-edition run of 10 pieces – representative of the 10 years Broom's studio has been around – and each clock will feature a plaque noting the edition number.

Broom decided a clock was the right sentiment to celebrate his studio's tenth anniversary as they are "synonymous with the commemoration of a significant passage of time".

"I've always wanted to design a grandfather clock," he said. "My grandparents had one in their home and I was always fascinated by its majestic appearance and its intricate mechanisms."

"It was important for me to create something contemporary that was very opposite to the traditionalism usually associated with grandfather clocks, so I started to look at a more modernist silhouette, creating very faceted angles and straight lines, similar to that of brutalist architecture."

The Time Machine incorporates a traditional clock mechanism, which has been modified by Broom so that it only uses one central weight as opposed to two.

The weight, hands and pendulum are all handmade from polished solid brass, with the spherical shape of the pendulum designed to contrast with the triangular prismatic weight.

"For the brassware I wanted to include themes I've explored in recent collections around balance, form and pivots and the brass is again a material I have worked with on collections over the past ten years," said Broom.

The Time Machine clock will be presented at this year's Milan design week in April, at an installation of the same name.

Broom set up his own design label in 2007. As well as numerous collections of furniture and lighting, he has also completed a variety of retail, hospitality and residential interiors, including a personal shopping suite for Topman and a prostitution-themed restaurant. 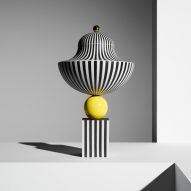 Most recently, he created a collection of ceramics for British luxury brand Wedgwood featuring monochrome stripes and colourful detailing reminiscent of postmodernist design.