As part of the exhibition, called Divine Inspiration, Broom has taken over an entire building in Milan's Brera district and filled it with more than 100 lights.

Across a series of rooms, the designer is presenting pieces that borrow from the monumental, ethereal quality of religious buildings and artefacts, particularly those designed in the mid-20th century.

Designs on show include Vesper, a geometric pendant design with its roots in modernist cathedral lighting, and Requiem, which takes the form of draped fabric.

"I have always loved brutalist architecture, even as a child," said Broom, reflecting on his early years growing up in Birmingham and visits to buildings such as the now-demolished Central Library by John Madin.

"I wanted this collection to be mainly inspired by that," he told Dezeen. "But when I started researching, I discovered the places I was most drawn to were places of worship."

"This led me on a fascinating journey to researching cathedrals, temples and churches, from antiquity to mid-century to the present day," he added.

"I wanted to create a lighting collection that invoked that same sense of awe and mysticism as those buildings and their interiors."

The exhibition starts in a relatively small room that Broom describes as being like a decompression chamber.

At its centre is a large-scale stone urn designed by Frank Lloyd Wright, in a nod to the Unity Chapel built by the modernist architect in Illinois in 1908.

Illuminating this space is the Pantheum wall light, which takes its cues from the coffered concrete ceiling of the Pantheon in Rome. Several of the lights are arranged like tiles, cast in Jesmonite and sandblasted to give a rough texture to their tiered forms.

The next room is a large hall, where Broom's fluted aluminium Hail lights are arranged to create a six-metre-long hanging installation, positioned above a mirror to create the impression that the pendant stretches into infinity.

"When you walk in, you see a 12-metre extension of this light," said Broom. "The idea is to reference the idea of the rapture, of going up into the heavens."

A staircase leads up to a mezzanine showcasing the slender Altar pendants, which combine illuminated tubes with a smooth body of carved oak.

These are organised around a contemporary altar, where a matching carved-oak font is framed by a large vertical disc of stainless steel. 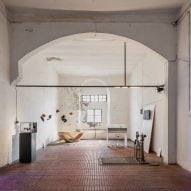 A grand installation of the extruded aluminium Vesper lights takes over the next space.

Here, Broom's team designed a stained-glass decal informed by mid-century designs and applied it over the windows. The brushed silver and gold-coloured lights are suspended in front, arranged both vertically and horizontally.

"It's a dramatic, ecclesiastical moment but it's uplifting because of the colours and the amount of natural light," said Broom. "You get to see all the different angles of these lights. They're like brutalist sculptures with these modern, illuminated connections."

The penultimate room is a basement featuring Chant, a light inspired by glass blocks, while the final room showcases the four different forms of the Requiem light.

Unlike his other products, Broom makes each Requiem light himself by hand. The process involves dipping fabric into plaster and sculpting it around illuminated rings, tubes or spheres.

"The process reminds me of draping fabric on a tailor's dummy," said Broom, who studied fashion design at Central Saint Martins before becoming a product designer.

Requiem comes in four versions and Broom will make a limited edition of 15 for each.

"I've been in business for 15 years and things have grown rapidly," Broom explained. "So I thought for this piece it would be really nice to get back to basics."

"I really wanted to get my hands dirty and actually get my hands physically on the pieces," he added. "The idea was to make them look like pieces of draped fabric with light sculptures inside them. But they're actually solid plaster."

Broom has created many extravagant Milan exhibitions in the past, including the celestial Observatory in 2018, the carousel-style Time Machine in 2017 and the Salone del Automobile delivery van in 2016.

The designer hopes that the Divine Inspiration exhibition – and the soothing soundtrack that plays throughout – will provide visitors with a calming, ethereal experience.

Although he doesn't describe himself as a religious person, Broom believes that places of worship have a uniquely powerful ability to provoke introspection and reverence.

"The key thing is to take people on an emotional journey," he said. "I don't see why design can't evoke some of the same emotions we feel from art, architecture or theatre."

The photography is by Luke Hayes unless otherwise stated.