This renovated Manhattan apartment by Russian architect Peter Kostelov features tucked-away furniture that pulls out to suit the needs of its user.

The Uptown apartment originally had two bedrooms, a living room, a bathroom and a kitchen – a layout that closed off each space from the others.

Kostelov intended to open up the home and create rooms that could serve multiple functions.

"The main aim of the project is a concept of effortless transformation," said the architect. "For example, a living room can easily be transformed into a dining room, while a working studio turns into a guest bedroom in no time."

To make the apartment adaptable, the designer used wood panels to elevate the floor, build out the walls and lower the ceiling in the middle of the property.

This central volume acts as a studio/bedroom, and also holds various items of furniture within its floor and walls, which pull out into this space and the surrounding rooms.

A bed slides out into the bedroom, while a table and two benches on wheels draw out to just over two metres in length into the living room.

Storage spaces in the walls also hide the services for the kitchen on the other side of the studio.

The narrow kitchen faces a brick wall across a tiled corridor, where wooden shelves fold out to form a breakfast table or extra counter space when necessary. The bathroom, the master bedroom and an additional third bedroom are also accessed off the entry corridor.

Fold-out furniture has been used by many designers to maximise space in small apartments. Other examples include a 1970s flat in Florence that transforms from a home to a workspace, and a tiny single-storey house in north London with adjustable plywood furniture.

At the New York apartment, Kostelov also changed the layout of the rooms to provide brighter living spaces and to buffer sleeping areas from the busy street.

"The main bedroom was relocated to the west side, so that street noise would not bother the sleeping tenants," he said. "As a result, the living room facing the main street gets more daylight and better natural ventilation."

Other renovated American homes include a 1960's house in Los Angeles and a Brooklyn residence featuring light wells carved into its original structure. 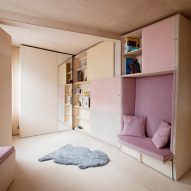