This ring hides a panic button that sends an alert to friends and emergency services if the wearer is in trouble.

The button is concealed in the underside of the ring – which otherwise resembles a normal piece of jewellery.

When held down for three seconds, it calls for help from contacts and people within 300 yards, who receive a message with the wearer's location and personal details through the Nimb app.

The device – which was presented at London's Wearable Technology Show last week – is also able to make an automated call to the police, and share the individual's name and location with the call operator.

Accidental alarms can be cancelled using the app, with a separate password used to notify contacts of a forced cancellation.

Wearers set specific people to receive emergency alerts. They can also volunteer to receive notifications – with the idea being that the app forms a community of strangers ready to help.

Nimb is intended for use in all emergencies, including natural disasters and health-related issues, as well as assault. By using a simple button press, Nimb is designed to save users the time and trouble of getting a phone out to call for help.

The idea for the device was part-inspired by co-founder Kathy Roma's own experience of a brutal attack in 2000, as well as stories told to CEO Leo Bereschansky by friends who had experienced street assaults.

It comes in either black or white, and according to the company has a battery life of up to two weeks. Nimb is currently available in the US, and retails for $149 (£120).

Other recently launched wearable technology includes a condom that measures performance in the bedroom and an earpiece that promises to translate languages in real-time. 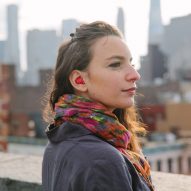