London designer Moritz Waldemeyer based this headgear for the lead singer of Jamiroquai on pangolin scales, creating sections that individually move and light up.

Waldemeyer designed the hat for Jamiroquai's frontman Jay Kay, known for his elaborate headwear, to wear in the music video for the brand's latest track, Automaton.

Waldemeyer wanted the design to reflect the "futuristic" feel of the track, while Jay Kay was keen to reference the pangolin, an animal with a scaly body.

"The starting point for inspiration that Jay Kay gave us was the pangolin," Waldemeyer told Dezeen. "Not only did it capture his imagination as an endangered species, also the scale patterns offered a great starting point aesthetically."

Each scale on the 3D-printed hat is individually motorised and illuminated, allowing lights and movements to be sent across its surface – an effect Waldemeyer describes as looking like the wearer's "nervous system".

"We have individual control over the angle of every single scale and the light output of every single LED pixel," he said. "This allows us to run both light animation and movements across the hat as if they were an integral part of the wearer's nervous system."

Waldmeyer and his team worked alongside Jay Kay throughout the entire design process. Having created a parametric model, they invited the musician to change its shape, angle and number of scales on a screen in real time.

"This tool made the process one of the most satisfying and constructive design collaborations with a client that we ever had in the studio," said Waldmeyer. "The software tool and the fact that we would go to the pub in his vintage Ferraris."

Once the team had finalised the design, each part was 3D-printed before being assembled together with the motors and LED boards. 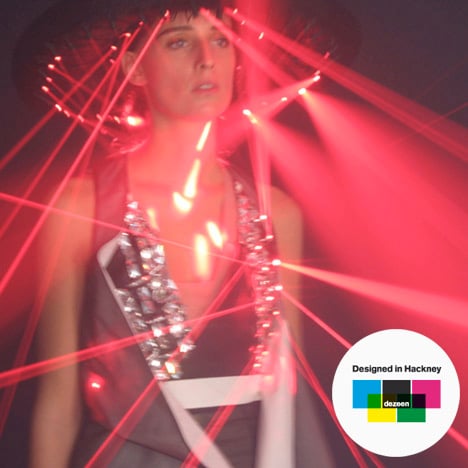 Designed in Hackney: laser dresses by Hussein Chalayan for Swarovski

He has also collaborated with fashion designer Hussein Chalayan and Irish milliner Philip Treacy, for whom he designed a whirring helicopter of LEDs to create the illusion of a glowing hat.