One of the best-known projects of SANAA co-founder Ryue Nishizawa has been recreated inside London's Barbican as part of an exhibition about Japanese housing, along with a charred timber teahouse by Terunobu Fujimori.

The Japanese House: Architecture and Life after 1945 looks at the experimental architecture that emerged in Japan after the second world war, and how it has developed up to the present day.

Split across the two levels of the Barbican Art Gallery, it offers an overview of distinct styles that defined house design in the country during this period, by showcasing the work of 40 architects.

The centrepiece of the exhibition is a full-size model of Nishizawa's Moriyama House.

Built in 2005, this residence was designed by the Pritzker Prize winner to challenge the format of the typical Japanese house. It sees the traditional home deconstructed into a series of separate rooms, arranged around a garden.

The exhibition design – executed by former SANAA-employee Lucy Styles – recreates several of the residence's white blocks, seeing rooms slotted beneath staircases and between columns of the Barbican's brutalist concrete structure.

The pods, representing living spaces and bathrooms with traditionally scaled-down bathtubs, are dressed with a selection of objects picked out to represent the owner's belongings.

They are furnished with SANAA rabbit chairs, Brian Eno and Sonic Youth records, pot plants, an abundance of paperbacks, and Muji toiletries and stationery.

Moriyama-san, a film by Ila Bêka and Louise Lemoine charting the life of the house's owner, screens in an adjacent booth.

Alternate strips of charred wood and white plaster clad the stilted structure, which has large porthole windows and a ladder leading up to an entrance in its base.

The rest of the exhibition is organised around these two structures. Upon arriving, visitors are first led upstairs to a series of exhibition spaces on the mezzanine. They are then invited to explore further galleries on the lower level.

Highlights include a full-size recreation of a room from Kazuyo Sejima's House in a Plum Grove (2003), a model of Tadao Ando's Row House (1976), and photographs of Takemitsu Azuma's impressive Tower House (1974).

The Japanese House: Architecture and Life after 1945 is on show at the Barbican Art Gallery until 25 June 2017.

This is the second leg of the exhibition's tour, which was previously on show at the MAXXI museum in Rome and will move on to the Museum of Modern Art in Tokyo in July 2017. However, the houses were not part of the last exhibition.

Dezeen spoke to the exhibition's co-curator, Pippo Ciorra, about some of the show's headline projects earlier this year, including the U-shaped house Toyo Ito designed for his sister and the Moriyama House. 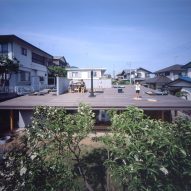 Photography is by by Miles Wilis.

More at the Barbican