Estúdio Casa G has completed a residence in the Brazilian rainforest, creating a home within the concrete shell of an existing structure and building a new pavilion for social spaces.

The project is located in the vicinity of Belém, in the north of Brazil. It was built as a natural retreat for its owners to escape the city.

"The main white block of the house already existed, but in a configuration of decades ago," said Estúdio Casa G.

"To speed up the construction we chose to keep it, and create a box in the shape of a house inside."

The large intermediate space that lies between the existing structure's enclosure and the new addition was used to lay out social spaces. These areas are covered but unenclosed, which is ideal for the Amazon's warm but rainy climate.

The area includes lounge furniture, dining spaces, and informal outdoor seating. A rough concrete colonnade encircles the main portion of the home, offering generous connections to the forest beyond.

The centre of the 300-square-metre home contains the kitchen, a small living room and the resident's living quarters. There are three bedrooms within the enclosed portion of the home.

The secondary structure was built to receive guests, and is known as the "gourmet annex". It consists of a 35-metre-long slab supported by circular pilotis.

According to the architects, this pavilion "seeks the interpersonal relationship of the users in the space through a great free span for socialising on festive days".

The low-slung concrete structure was built around a eucalyptus tree that punches through the roof slab and separates the dining table from a more laid-back area.

"The two annexes are integrated by the exuberant nature around the house, and the users permeate between them easily," said the architects.

"Maintaining visual contact with other people that occupy the spaces of the property was a fundamental aspect in the concept of the project."

"Casa Bonanza's materials and textures evoke sensations and emotions, hospitality and warmth, and a connection with history," said the studio.

Other projects in Brazil include a home interspersed with lush courtyards outside Brasilia and a pair of prefabricated homes in a historic coffee plantation on the edge of a nature reserve between São Paulo and Rio de Janeiro.

Photography is by Guto Delgado. 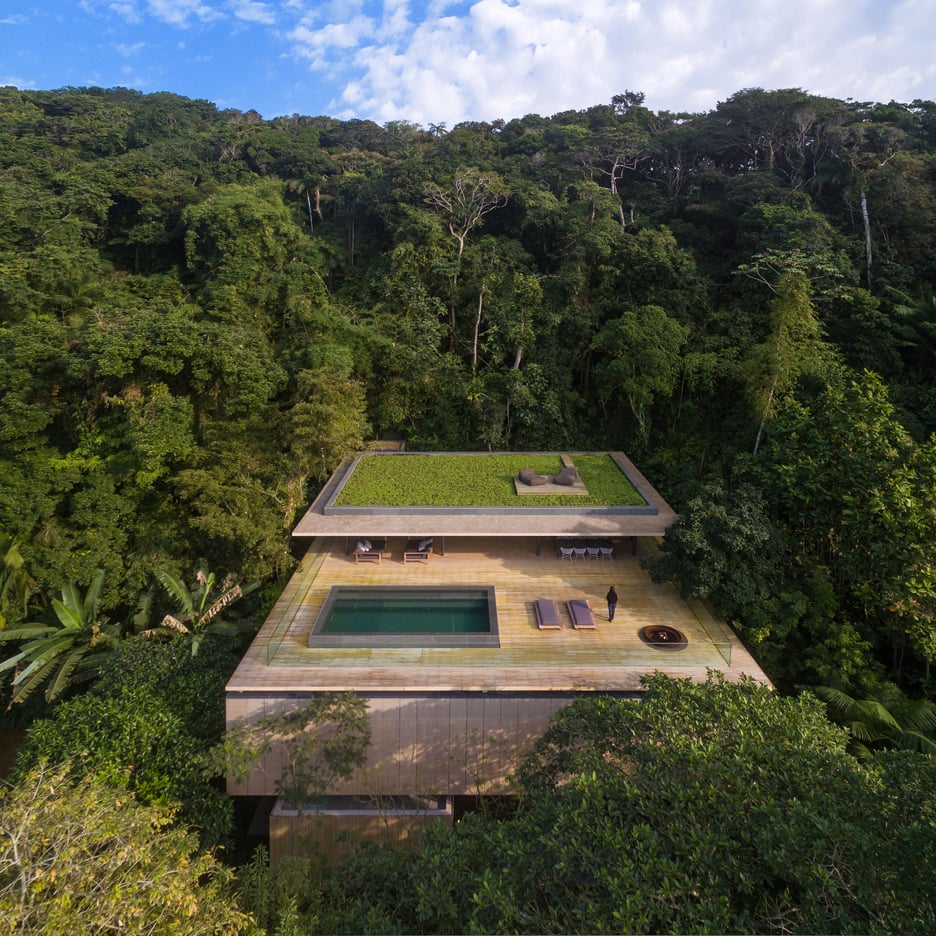