A skeletal grandfather clock and a bulging chair are among the products showcased in this exhibition at DesignMarch, which brings together designers from countries in the Baltic region and Iceland.

It was previously shown in Malmö and Tallinn. But as it is now being presented at DesignMarch in Reykjavík, it has been updated to also include the work of Icelandic designers.

Each design in the exhibition reference coastal landscapes. Rather being organised geographically, the works are divided up into six "zones" that refer to different things, including horizons, nets, harbours and shells.

Seafaring materials such as nets and rope have been used to create poufs and hammocks, while spiky cord lamps and hand-blown glass vases resemble stones and coral.

Curator Agnieszka Jacobson-Cielecka wanted the exhibition to evoke shared memories of growing up by the Baltic seaside, regardless of nationality.

"In this exhibition, experiencing the sea is the key to the selection. The objects representing countries are strikingly different, but connected thanks to the coastline," she said.

The exhibition is on show at Nordic House from 13 – 31 March as part of DesignMarch 2017, Iceland's largest design fair.

Here are eight highlights from the exhibition:

Icelandic designer Thórunn Árnadóttir combined traditional craft practised by local netmakers in East Iceland with locally sourced materials to create a nautical-themed collection, which included a hammock and a swing.

German designer Milena Krais created her knitted Deform furniture series while studying textiles in Hamburg. The series of chairs are squashed out of shape and contorted to reference the imperfect form of the human body.

Ania Rosinkie and Maciej Chmara of Vienna-based Chmara Rosinke have created a contemporary version of a grandfather's clock by stripping the form to its bare bones.

Polish duo Agata Kulik-Pomorska and Pawel Pomorski of Malafor referenced their background in industrial design for their Yacht stool, which comprises an inflatable bag balanced on a tubular frame.

Swedish designer Lisa Hilland designed the Bow chair for Sweden's oldest bentwood factory, Gemla. Made from beech, the chair uses minimal amounts of materials thanks to its curved form.

Copenhagen designer Jonas Edvard uses natural materials such as limestone, bio-resin and leather in his lighting designs. His Konkret lamp is dyed with a natural wood stain and mounted with a leather strap. 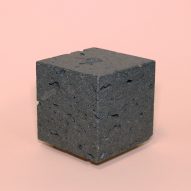