Located in the city of Odawara, in the vicinity of a 15th century castle, Hafye is designed to create the feeling of being suspended in mid-air – hence the top-heavy design.

This unusual form, described by locally based Cubo Design Architect as animal-like, was developed directly in response to the brief set by the client.

"The client, who was born and raised in Odawara, wanted a relaxing home where he and his family could look out on this familiar, yet constantly changing landscape" said the team.

"The gently linked rooms are divided into zones by differing floor elevations and ceiling heights, but one can enjoy the views and natural light from each space."

To emphasise the difference between the upper and lower volumes, the building's reinforced concrete structure was left exposed at the base, while the upper sections are clad in dark-stained timber.

Inside, the house contains an open-plan kitchen and living space, two main bedrooms and bathrooms, a guest room and a music room.

Initially, the concrete ground-floor volumes were only going to be used an entrance. But later, at the client's request, this was extended to form the music room and guest room.

This dimly lit entrance space leads directly through to a staircase, bringing residents up into the light-filled "mid-air" volume above.

Here, living spaces are fronted by floor-to-ceiling windows that open out to a balcony, where occupants can look out over the city.

The children's bedroom is located within the pointed end of the overhanging structure, which angles down diagonally to follow the slope of the road.

"The overhanging first floor looks like a nose of an elephant – which I had in mind when I first looked at the site" Hiroshi Saruta of Cubo Design Architect told Dezeen.

The internal materials and textures were chosen to resemble nature, to create the feeling of being outside. The ground floor combines board-marked concrete with wooden fittings and a stone floor.

The simply finished first floor features painted walls that can be used as blackboards, and puts focus on the kitchen's statement unit, which is made from solid stone and wood.

The team also landscaped the sloped site, to create a space the family can use as a vegetable garden. 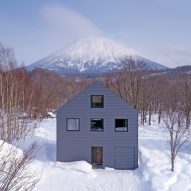 Cubo Design Architect is led by architects Hitoshi Saruta, Tomonori Takauchi and Masanori Kanetani. They completed Hafye in late 2015. It has a total floor area of 187 square metres.

Photography is by Hiroshi Ueda.