New York-based designer Karim Rashid has revealed that he was stopped and held by US Border Control at JFK airport yesterday.

In a post on his Facebook page, Rashid – who was born in Egypt, but grew up in Canada – said he was rejected by the USA's Global Entry system after flying home to New York from Tbilisi, Georgia.

This happened even though he has been a legal US citizen for the last 13 years, and held a Canadian passport before that.

"After flying 18 hours from Tbilisi, Georgia, I landed in JFK to be rejected at Global Entry. I was put in the border customs and immigration room for over an hour. I watched many immigrants come in and out and I was the longest in the room."

Rashid established his New York-based studio in 1992, after studying design at Carleton University in Ottawa and Rodolfo Bonetto Studio in Milan.

Once described by Time magazine as the "most famous industrial designer in all the Americas", his best-known works include the Snoop and Woopy chair and the Bobble water flask. He ranked at number 163 on the inaugural Dezeen Hot List.

The designer claims he is being sidelined because of his Muslim name, which he believes is on a watch list.

He said he was held in a "dirty disgusting space" and kept under surveillance while he went to the bathroom, but was eventually allowed through after authorities received a phone call verifying his identity.

"This happened to me after 9/11 for about four years until I became a USA citizen," he added.

"Apparently my name is on some watch list again. It stopped 13 years ago after getting a US passport, but now I am not sure what the solution will be." 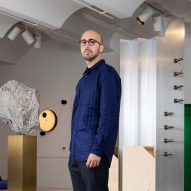 New York design gallery founder denied entry into the US

Since Donald Trump became president in January 2017, travel into the US by non-citizens has been limited and immigration rules have been tightened.

The president proposed restrictions preventing citizens of seven countries in the Middle East and North Africa from entering the US, and has also pledged $2 billion towards his plan to build a wall along the American border with Mexico.

After that, Juan Garcia Mosqueda, founder of New York design gallery Chamber, had a similar experience to Rashid – but rather than being eventually allowed into the country, he was instead forced onto a flight back to Buenos Aires.