US President Donald Trump's first budget plan includes a sizeable downpayment on his promised wall along the country's southern border with Mexico.

Revealed yesterday, Trump's Fiscal Year 2018 federal budget calls for $2.6 billion to be spent on "tactical infrastructure" and other security technology at the border, with $2 billion reserved for the construction of the wall itself.

An additional $1.5 billion would pay to build new detention facilities for illegal immigrants, according to the New York Times.

How federal money is eventually spent is up to US Congress, which will make decisions based on the president's proposals.

The contentious wall, which formed a key part of Republican Trump's presidential campaign, is likely to be fiercely objected by Democrats and therefore may not receive his full suggested sum. 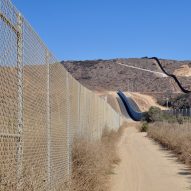 The president's original figure to construct the 2,000-mile-long barrier was $12 billion (£9.6 billion), but a report leaked from the Department of Homeland Security estimated that the cost could be as high as $21 billion (£16.8 billion).

How he plans to make up the remainder of the cost after the federal funds remains unclear.

Last month, Trump vowed to bring down the price of the wall by personally getting involved with the "design or negotiations".

He originally called for Mexico to foot the bill, but the country has repeatedly refused.

Details about the design requirements and the deadline for submissions for prototypes were released earlier this month.

The tender asks for 30-foot-tall concrete barriers, and bidders have until 20 March 2017 to submit first-round proposals.