We need to stop concentrating our energies on hazard-proofing playgrounds, and worry instead about how our buildings and environments could be better suited to children, says Phineas Harper in this Opinion column.

How often have you seen a child scolded for attempting to climb up the ramp of a playground slide, rather than descending demurely down it? Take a second glance at the objects in most playgrounds and you'll clock the extent to which they are totally prescriptive, designed to be used in a single way: a roundabout for spinning on, a swing for swinging on.

Now consider your home and the many activities that take place within, say, your bed alone – sleeping, reading, working, watching films, maybe yoga, maybe eating and, of course, sex.

Play can be defined as freely chosen, personally directed, and intrinsically motivated. It is a uniquely evolved feature of human behaviour and a critical part of social and cognitive development. As adults, our lives are enriched by finding multiple uses for single objects, but our children are constantly instructed to play in ways predetermined by adult designers.

The word "play" intrinsically conjures up notions of imaginative freedom, but children are rarely permitted such liberty. Ironically they are often most controlled in playgrounds, which are still modelled on Victorian notions of character-building gymnastic exertion: monkey bars, assault courses, balance beams, etc. It's a truism that young children would often rather play with the box a new toy has come in than the toy itself, because the unscripted box unlocks the imagination. Why then, when it comes to the scale of architecture, do we forget this and dictate children's play so stringently?

A huge part of the problem is the perception and management of children's safety. As 21st century city-makers, we simultaneously bubble-wrap young people, seeking to protect them from minor bumps, while leaving them exposed to far more existential risks.

Dangerous accidents involving playground equipment are incredibly rare. Researcher David Ball has shown that, in the UK, such incidents kill a child on average once every three and a half years. In the same period of time, approximately 137 children will die by being being run over on British roads and 725 on American roads. Yet it is children's playgrounds, rather than highways, that receive constant and disproportionate interventions in the name of safety.

For example, rubber "safety surfacing" now accounts for up to 40 per cent of the total budget of British playgrounds. In the decade following 1994, around £200 million was spent on installing this kind of spongy landscaping, rather than on new playgrounds. But, as Ball has shown, the measure has saved on average 0.1 lives a year.

We simultaneously bubble-wrap young people, seeking to protect them from minor bumps, while leaving them exposed to far more existential risks

The practice of over-the-top hazard-proofing playgrounds has nothing to do with genuine concern for children so much as adult virtue signalling. So-called best practice in playground design is neither evidence-based nor effective. As author Tim Gill argues in his book No Fear, children's lives are "being undermined by the growth of risk aversion" which "limits their freedom of movement and corrodes their relationships with adults".

Enthusiasm for risk-management design interventions is high when it is children's behaviour that is limited, but quickly evaporates when adults' ability to drive two-tonne metal vehicles to their front doors at 30 miles per hour is challenged. This hypocrisy is rank – children are denied the chance to play in muddy puddles in the name of their own safety but are mown down on roads or asphyxiated by polluted air for the convenience of adults. It's a culture that urgently needs to change. 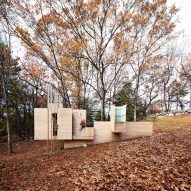 Children are uniquely disenfranchised as citizens. They have no political or professional voice. They can't vote, have no capital, aren't able to leverage social networks and are (obviously) unskilled.

It is becoming common to see adults "empowering" young people by granting groups of children limited authority over specific urban interventions. Children might be permitted to pick the name of a new street, or choose the subject of a mural. Sometimes you will see children's own artwork decorating public spaces. This practice is occasionally charming but is at its root insincere and tokenistic – as if authorship of a crude mural can compensate for a childhood of civic constriction.

Lee Ivett, chair of Baltic Street Adventure Playground and founder of Glasgow architecture practice Baxendale, whose work frequently engages diverse community groups, put it bluntly: "Children are shit at painting" he said. "I involve kids in loads of the projects I do, but I'm just careful about where the boundaries are between my agency as a designer and what role the children are playing in informing my actions."

Elsewhere, the growing interest in children is manifesting in a rash of disingenuous spectacle-based projects that infantilise infants and adults alike. Take the musical railings which sound "The Girl From Ipanema" when struck, created by artist collective Grayworld, or Volkswagen's transformation of a public staircase in Stockholm into over-sized piano keys (aping the giant keyboard in Penny Marshall's 1988 blockbuster Big, on which baby-faced Tom Hanks played Chopsticks).

These installations advance a trend of interactive public art commissions which claim to make the city "playable" and thus child-friendly. In reality these installations embody adult ideas of playfulness but fail to reflect the actual behaviour of children. They are like Thomas Heatherwick's rolling bridge – delightful but frivolous one-off follies primarily for adults' pleasure.

Ultimately the question of children's token authorship of the built environment or the presence of novelty talking lampposts (another allegedly child-friendly innovation, this time from Bristol) is irrelevant when their ability to play freely is so inhibited.

As Ivett explained: "I often get asked to design play environments but quickly discover there's a strong aversion to permitting children to play within the environment as it exists. It is often the attitude of place that is the main barrier to children's fulfilment rather than design. Before designing for children's play you should just let them get on with it."

There's no point making a playground until you've taken the "no ball games" signs down on the estate first.

Photograph of Studio Makkink & Bey's adventure playground in Reimerswaal is by Nadine Stijns.