The latest addition to Mattiazzi's furniture collection is the stripped-back Quindici lounge chair by Ronan and Erwan Bouroullec, launched at Milan design week.

The seating comes in two editions – an armchair, and a chaise longue version with an additional leg rest. Both feature T-shaped armrests that contrast the softer silhouette of the seat, which is made from thin panels of ash.

"The balanced angles of the wooden plates create a minimalist, compact furniture experience," said Mattiazzi, which has also partnered with Industrial Facility and Konstantin Grcic for new additions to its line.

Quindici comes in several finishes, including grey and black, with upholstery in white, dark green or black Kvadrat textiles – creating a visual "sandwich", as Ronan Bouroullec describes it.

The Bouroullec brothers have been working together for almost two decades, and have been involved in collaborations with some of the biggest names in the design business – including Vitra, Kvadrat and Hay.

In 2015, the duo designed an unconventional TV for Samsung, which was held in a distinctive I-shaped frame. They also ranked 38 in Dezeen Hot List, and third in the designers list.

The Quindici range is Mattiazzi's first upholstered lounge chair, but not the first time the Italian brand has partnered with the pair. In 2014 the brothers designed a range of metal and carved wood chairs, and in 2011 released seating made of four petal-like wooden panels joined together.

The Quindici chair makes its debut alongside a dining chair with a tilted backrest, designed by Konstantin Grcic to have a "strong architectural presence". The seating is available in solid beech, as well as black lacquered and gold finishes.

Both pieces are on show at Salone del Mobile from 4 to 9 April. Also launching at the furniture fair is the new 1 Inch chair by Jasper Morrison for Emeco, which the designer describes as one of the most complicated of his career, and a minimalist screwdriver set by Oregon-based designer Erdem Selek. 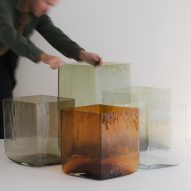