London Design Festival 2015: French designers Ronan and Erwan Bouroullec are launching their first electronics product – a flat television for Samsung that is outlined by an I-shaped frame.

First unveiled earlier today in an exclusive Dezeen movie, the Serif TV is a result of a collaboration between the designers – better known for their furniture, homeware and installations – and the Korean electronics brand's head of visual display design Yun-Je Kang to create the Serif TV.

Exclusive movie interview with the Bouroullecs on the Serif TV

Its colourful frame was designed to fit better within the home, compared to the black and metallic products that currently dominate the market.

"Serif TV does not belong to the world of technology but the world of furniture and design," said a statement from the studio.

The product has an I-shaped profile, broadening at the bottom to form a sturdy base and at the top to create a small shelf. 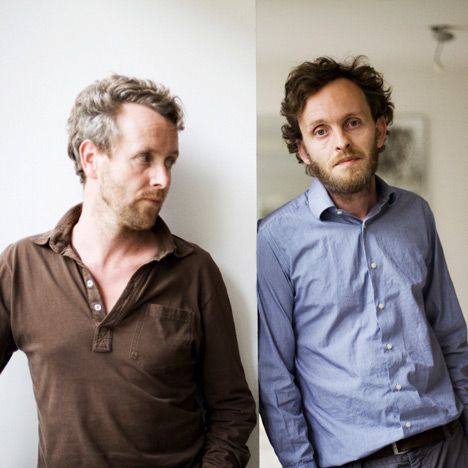 These protrusions give the product the name Serif, after the typography term for the small lines on the end of strokes in letters or symbols.

"From the outset of designing Serif TV our aim was to craft an object that fused technology with our knowledge in furniture design and to create a solid presence that would sit naturally in any environment," said Erwan Bouroullec.

The frame surrounds the flat screen and is available in ivory white, dark blue and red. A woven fabric panel in a matching colour slots onto the back of the television to cover the connectors, helping it to look tidy from all angles.

"Serif TV deploys shapes and colours that have broken away from the usual themes of masculine, cutting-edge technology and extra-large size," said Erwan Bouroullec. "Our TV is more subtle; it doesn't exude power and is made to fit into the world we live in."

Attachable legs allow the design to be placed on the floor, or the product can sit on a flat surface. Serif comes as a 40-inch model (102 centimetres), with Serif Medium and Serif Mini versions also available.

The duo also developed the user interface, including a transition between standby and normal viewing options called "curtain mode". This feature is designed to provide a "silent, abstract impression of the TV screen contents, offering a present, yet recessive, role for the TV".

The collaboration with Samsung began in 2012, when Kang visited the designers' studio in Paris. Numerous drawings, computer models and a series of physical prototypes in wood and clay all formed part of the design process.

"As technology increasingly forms part of our day-to-days lives, the design of a product is now just as important to consumers as its functionality," said Kang.

"To address this Samsung has been focussed on creating a new breakthrough in the TV market that reflects on users lifestyle and emotions rather than just on technology and specifications, and Ronan and Erwan Bouroullec have been integral in helping us achieve this with the creation of Serif TV."

Serif will launch as part of an exhibition at Somerset House from 21 to 27 September 2015, as part of this year's London Design Festival. See Dezeen's pick of exhibitions and installations taking place during the event.

The TV will be available from retailers in the UK, France, Sweden and Denmark from 2 November 2015.

At the CES trade show in Las Vegas at the beginning of this year, Samsung unveiled a TV designed by Yves Behar that features a curved screen mounted on a cube-shaped pedestal.