Called 1 Inch, the collection includes a chair, armchair and stools in three heights as well as cafe and bar tables. Each piece features a simple frame made from a recycled, one-inch-square extruded aluminium tube that was selected for its strength-to-weight ratio.

In keeping with Morrison's typically utilitarian style, the frames feature gently rounded edges and slightly splayed legs. Seats and backs are available in fabric or leather, sustainably sourced walnut or ash plywood, or one of seven colours of polypropylene.

Describing the chair as "probably one of the most complicated chairs I've designed", Morrison created the 1 Inch collection to suit a range of different environments.

"I'm more and more interested in working towards designs which take part in everyday life as naturally as possible," explained Morrison. "The 1 Inch chair, though far from spectacular, is intended to be an updated Emeco solution to a wide variety of situations where something strong and less flashy is required."

"The design of the chair seemed basic enough and we were not expecting much trouble in developing it, but we underestimated the complication of bending square aluminium tube in more than one plane simultaneously," he continued.

"It took Emeco several months of experimentation and false starts and it took us uncountable revisions to the drawing before we found the way to do it."

The 1 Inch collection is Morrison's second collaboration with Emeco following on from the Alfi collection, a range of seating made of reclaimed post-industrial waste, that was launched in 2015.

Morrison, who is widely regarded as one of the world's best industrial designers, set up his Office for Design in London in 1986. Over the course of his career he has worked with brands such as Muji, Samsung, Ideal Standard and Camper, and is currently art director of Swiss electronics company Punkt.

In 2006 he popularised his self-coined term "super normal" to describe the ideal of unobtrusive but atmospheric design, and in 2015 a touring retrospective exhibition called Thingness was accompanied by a new monograph called A Book of Things.

The 1 Inch collection will be displayed on the Emeco stand, Hall 20 Stand E29, at the Salone del Mobile from 4 to 9 April during Milan design week. Other products launching during Milan design week include the final furniture collection by the late Japanese designer Shigeru Uchida, a minimalist screwdriver set by Oregon-based designer Erdem Selek, and a series of jellyfish-inspired silicone vases by Nendo. 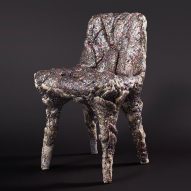