Peter Zumthor has released new images of his proposals for Los Angeles County Museum of Art revealing that, in contrast to his early designs, the Swiss architect has opted for light tones for the building's exterior.

The latest renderings show the serpentine structure's concrete roof and floor plates in an earthy tone – a significant departure from the original black colour, intended as a reference to the nearby La Brea tar pits.

The exterior will now match the hue of the 37,000 square metres of gallery spaces and public amenities that Zumthor will create during the $600 million (£483 million) overhaul of LACMA, which is already the biggest art museum in the west of the US.

The floor plan for the elevated building appears unchanged from the last proposal, still snaking over the busy Wilshire Boulevard and supported by eight "anchor" galleries.

Principal access to the museum will be on both sides of the road, leading to an upper level that will be surrounded by glazing but further illuminated by skylights.

Due to commence in 2018, construction will involve demolishing four of the museum's current buildings.

Zumthor has been working on the project since 2008, and it has undergone several design modifications since the plans were unveiled in June 2013.

A revision to the layout was made the following year to avoid damaging the protected tar pits, resulting in the bridge over Wilshire.

Updated visuals of the project were released in August 2016, but Zumthor later revealed that the images did not show the building as he intended it.

Peter Zumthor ranked at number seven on the inaugural Dezeen Hot List –  a countdown of the most newsworthy players in the architecture and design industry.

The 2009 Pritzker Prize-winner is known for his site-sensitive buildings like the Therme Vals spa in Switzerland and Steilneset Memorial in Norway. He is also set to extend Renzo Piano's Fondation Beyeler art museum in Basel. 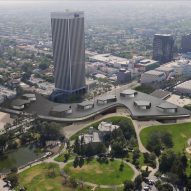 I don't like the LACMA renderings, says Peter Zumthor