Patterned rims, bespoke Pirelli tyres, raw aluminium and a signature lamp for a headlight feature in Tom Dixon's custom Moto Guzzi motorcycle, which was on show during Milan design week.

Moto Guzzi presented the Tomoto motorcycle in one room of Dixon's massive Multiplex exhibition – a showcase of new design by Dixon and several handpicked small studios, which took over the 1950s Teatro Manzoni cinema.

Dixon was inspired to embark on the collaboration following a lifelong passion for motorcycles, which he credits for starting his design career.

"I've had the same Moto Guzzi for 27 years, and it was time for a new one," Dixon told Dezeen. "I've always tinkered with motorbikes. They were always kind of vintage or collapsing, and I learnt to weld on the basis that I was going to fix a bike."

"I never fixed a bike, but I had a whole new career in making thing, which has turned into a design career," he continued.

"The love of motorcycles has never abated, and when I had the opportunity to visit the factory, which is an amazing document of 1920s manufacturing – it's still made in the same factory, just 20 minutes away in the hills above Lake Como – I managed to convince them to let me tinker with one."

The resulting custom bike was created together with renowned customiser Stefano Venier. Among its features are aluminium wheel rims with a star-like geometric pattern created as part of Dixon's experiments with digital punching technology.

The same untreated aluminium, undecorated, is used for the gas tank, which bears the inscriptions "Guzzi" and "Tomoto" in dripping hot-pink paint.

One of Dixon's older pendant designs, the Fin, is repurposed for the headlight, while a flexible exhaust pipe wraps around the motorcycle body from the engine.

The bike is finished with new prototype tyres Dixon developed through a second collaboration, with Milan-based tyre manufacturer Pirelli. Dixon developed a number of tread patterns for the brand, which Dixon describes as "another fantasy firm, an Italian classic".

While the two collaborations might evolve into further projects in the future, the current iteration of Tomoto is a prototype and display model.

"The difficulty with doing a proper production motorcycle with Moto Guzzi is that every time you do anything more than basically changing the fairing or the seat, you have to put it through a whole new EU testing regime," Dixon said.

"So you can't really change a lot of components, not even the exhaust pipe, without going through the whole EU process of going through all the norms. So it's quite difficult to do an all-new model."

Moto Guzzi displayed Tomoto within The Rubber Shop, one room within Dixon's Multiplex. The Milan design week installation ran from April 4 to 9 at the Teatro Manzoni on Via Manzoni 42.

Dixon is one of the UK's most popular and prolific designers, and recently came in fourth on Dezeen's designers Hot List. Self-taught, he rose to fame in the 1980s with the S-Chair for Cappellini and founded his eponymous studio in 2002.

At Multiplex, Dixon also launched his Delaktig sofa for IKEA, which is designed to be transformed into different styles of furniture over the course of its lifetime, as well as several new lighting designs.

Among the smaller design studios presenting their work in the shopfronts of Teatro Manzoni was Iota, a Tel Aviv-based social enterprise that uses crochet to employ and empower out-of-work women. 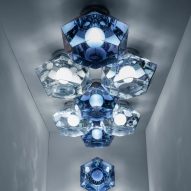