The five proposals emerged from a workshop held in December 2016, which invited architects to reimagine the brownfield sites of Farini, Porta Genova, Porta Romana, Lambrate, Greco, Rogoredo and San Cristoforo as public parks, social housing and hubs for sustainable modes of transport.

The ideas for the regeneration project – called Scali Milano – were presented at this year's Milan design week.

The Green River proposal put forward by Milan-based Stefano Boeri and his team is an "urban reforestation project".

Aiming to cover 90 per cent of the available area in public parks, forests, orchards and a network of bicycle paths, the office estimates the scheme could absorb over 45,000 tonnes of carbon dioxide emissions and produce 1,800 tonnes of oxygen.

The other 10 per cent of the land would be used to create areas of dense building comprising housing, workplaces and services such as libraries, clinics and kindergartens.

Dutch firm Mecanoo chose the competition as an opportunity to imagine the city with fewer cars and more sustainable modes of transport. Its plans show planted footpaths and cycling routes crisscrossing the old railway lines.

Paved spaces previously catering to cars would be freed up by a reduction in traffic and instead be covered by parkland. The yards would act as interchanges for the various modes of transport, while new buildings and public spaces placed around their edges would be suited to the surroundings – with student housing in some areas and urban farms in others.

"It's about daily mobility and preparing cities for the future – that's really our thing," said Mecanoo founder Francine Houben in a video discussing the firm's plans.

"For the future of cities it is very much about quality of life, and that's of course good housing, nice workplaces, good public space, green areas but also daily mobility."

EMBT Miralles Tagliabue's Miracle in Milan project would see each of the seven yards redeveloped as a hub for a different type of activity. A new design area would spring up around the canal in the Tortona district, and a new area for urban agriculture and a botanical garden in San Cristoforo. Other areas would see multitiered footbridges adorned with lights

Memory and Future: Milan reborn by Beijing studio MAD involves "village-like" developments – ranging from courtyard social housing to towers with wavering outlines – set around patches of greenery. The former freight warehouses would be used for a range of civic activities and a set of cycling and pedestrian paths would be created.

"The vitality of the future city does not rely on top-down modernist planning but exists in the symbiosis of multilayer urban elements, and the chemistry among them," said studio founder Ma Yansong. 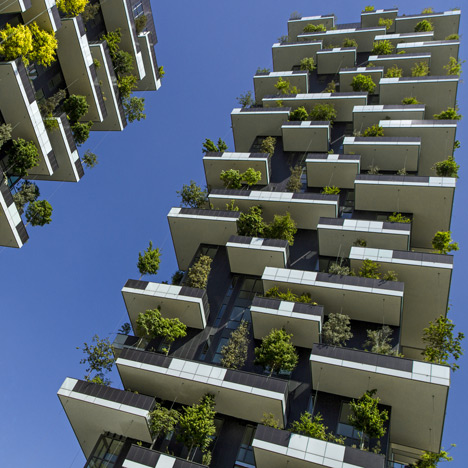 As part of the Dezeen x MINI Living Initiative, we created a video exploring Stefano Boeri's radical proposals to build "forest cities" to combat urban pollution. His proposal for Scali Milano follows on in his tradition of creating "vertical forests", which aim to reintroduce greenery into cities and provide a habitat for wildlife.