The Cut lighting comes in pendant or surface variations – the latter designed for the wall or ceiling. It has a mirror finish that appears opaque when switched off, and when lit up, reveals the bulb inside, reflected in an "endless" pattern off the faceted shade.

Dixon will also reveal an update to his Melt range in Milan. The Melt Surface collection is a flatter version of the existing lighting – made from half-metallised glass globes in distorted spheres – and is designed for use on the floor, wall or ceiling.

Other pieces to make their debut during the fair include a textile collection – which will feature cushions and blankets in velvets, boucles and knits – and relaunched and recoloured versions of early furniture created by the designer.

Dixon will be displaying everything at his Multiplex exhibition, which will inhabit an 840-seat 1950s cinema in Milan, the Teatro Manzoni. It will showcase his work alongside pop-ups from brands including Sonos, Mabeo and IKEA.

The space will also host food and drink kiosks, where visitors can enjoy upmarket popcorn and gelato served in handmade ceramic cones.

"Milan in April turns into the Glastonbury of design – a huge explosion of ideas, colours, shapes and functions, a massive influx of design obsessives all seeking the latest ideas," said Dixon.

"The reality is people are there for fun. We feel we might as well acknowledge what's really going on here and try to entertain people."

The space will also be a chance to see his collaboration with IKEA, which has seen the designer create a modular bed that can be transformed into different styles of furniture over the course of its lifetime. 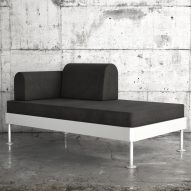