Australian architecture firm Panovscott has overhauled a federation-era cottage in Sydney, adding a stacked extension onto the rear of the building with large picture windows that overlook the garden.

Anita Panov and Andrew Scott built the extension with the intention of connecting the old house, dated 1917 with a 116-year-old Jacaranda tree that also sits on the property.

Once part of the Gelding Brothers Victorian Nursery, the cottage was passed down by its previous owners of 90 years to the current inhabitants – along with the history of the Jacaranda and the nursery.

The extension project is named Jac, in tribute to the tree, and is intended as a reflection on the way a structure ages in relation to its surroundings.

"This relationship between time and, more immediately, the cottage and the tree, enabled us to establish an architecture that is a hybridisation of those references," said the architects.

The cottage's facade bares original features of federation-era architecture, in particular the verandah, red brickwork and white-painted window frames, as well as a decorative cornice and frieze.

At the back of the house, three views of the tree are framed by large boxes surrounding the fixed glass windows, located in the ceiling and adjacent wall. The windows flood the back room with light shining from various levels.

When briefing the architects about the extension, the clients requested a space that was outward-looking, allowing the inhabitants to experience the passing of seasons and enjoy the gardens and view of the street, while also maintaining their privacy.

The downstairs reception rooms in the cottage feature traditional ornamental details including a skirting board, picture rail and exposed pine floorboards.

The width of the hallway remains unchanged as the architecture shifts from the cottage to the extension. The floorboards of the original house stop and a band of concrete marks a transition into the contemporary interior of the new structure.

Four steps lead down gently to the large room which is level with the garden. The change in floor level is reflected by a comparatively low ceiling beam, beyond which the room opens up into a large space overlooking the garden.

"Only at this moment is the width of the house experienced and emphasised by the windows located at the extremities of the space, washing light along perimeter walls," Panovscott said.

Large sliding glass doors conceal a wall pocket and the space opens out onto a bright brick lined courtyard.

"This is a place of privacy, away from the public domain and the rear garden space which is always shared in a manner between neighbours," the architects said. "It is an external space that has the proportion and characteristics of one of the more traditional rooms within the existing cottage."

The sole bathroom is comprised of four alcoves of various sizes. Pre-finished compressed cement floors, which match the walls and ceiling, merge seamlessly into a sunken bath– cast from a single piece of concrete, integral with the foundations.

Upstairs, the concrete is replaced by wooden floors, reflecting those of the downstairs cottage. A half-level wall forms a gallery which looks down over the staircase.

"Within this room and the bridge there is greater light intensity throughout the day and the two adjacent void spaces heighten the feeling of elevation," said the architects.

Panov and Scott came to think of the space surrounding the Jacaranda as a physical room, with the tree's branches forming a canopy nearly 12 metres in length.

The tree's seasonal nature creates a sense of transience, changing the environment dramatically from dense with moving shadow in the summer months, to heavy with purple blossom towards the end of the year.

Panovscott has created a number of similar stacked, cube-shaped extensions, including an artist's studio clad in the wood from old telegraph poles and another Sydney house extension. 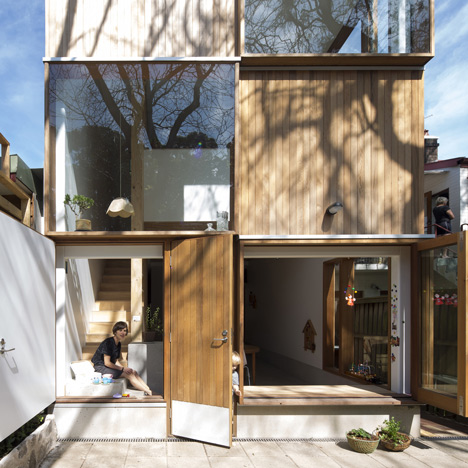