Swedish studio Front has put a new spin on the classic No. 14 bentwood chair by Gebrüder Thonet Vienna with its one-armed N.0 design.

The chair – which was launched at Milan design week – comes in two versions, one featuring a single loop-like arm.

Made from Thonet's trademark bentwood, the N.0's backrest is available in classic rattan or covered in a textile mesh, which is being shown for the first time by the brand.

The chair's circular back is based on the round seat of the original No. 14 – which was introduced in 1859 after cabinetmaker Michael Thonet set out to create the first affordable mass-manufactured chair.

He used a wood-bending technique to make the chair using just a small number of standard parts, which made for faster and more efficient manufacture.

Since then, millions of No. 14s have been sold and the design has been admired by everyone from architect Le Corbusier to designer Konstantin Grcic, who has described it as "one of the most beautiful chairs there is".

Thonet's furniture has been reinterpreted time and again by designers. Nucleo suspended it in resin, while Front previously created a rocking horse for the brand based on archive designs.

The brand has also expanded its remit, working with Danish duo GamFratesi to create a looped coat hanger from steam-bent wood and a range of outdoor furniture.

Thonet showed the chair at Salone del Mobile during Milan design week, alongside new sofas designed by Philippe Nigro and armchairs by LucidiPevere.

Front was set up in 2003 as a design collective of four, of whom founding members Anna Lindgren and Sofia Lagerkvist are still active. The studio also showed new furniture created for Offecct at the fair, in the form of an eight-person sofa aimed at office workers.

Other furniture highlights from Salone included seating based on torture devices by Philippe Starck and a stripped-back lounge chair created by the Bouroullecs for Mattiazzi. 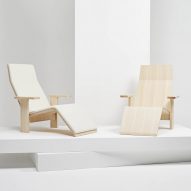