In our final movie from the AHEAD Asia awards last month, Australian architect Kerry Hill says he doesn't believe in "plonk architecture" and instead approaches every building differently.

Hill picked up the Outstanding Contribution Award at hospitality awards AHEAD Asia last month for his work on hotels and resorts across Asia.

He believes that his success working in the region is due in part to his practice's focus on creating contextually sensitive buildings that draw on local styles, building techniques and materials.

"We do not have a common architectural language," he says in the movie, which was filmed at COO hostel and bistro in Singapore.

"We like to think that each building is designed especially for its context and its place."

He adds: "I don't believe in what I call 'plonk architecture'. What I mean by that is a Gehry here, a Gehry there – architecture at home everywhere and nowhere. I feel that you need to perpetuate the traditions within the culture and material of a place through your architecture, so that it is appropriate."

Hill has designed a number of properties for luxury hotel and resort group Aman, and he gives the Amankora resort in Bhutan as an example of how he incorporates and adapts local materials and construction techniques into his architecture. 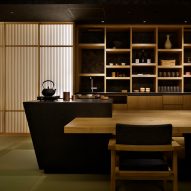 Completed over 15 years between 1992 and 2007, the Amankora resort comprises five lodges across Bhutan made using an earthquake-resistant alternative to the traditional mud building technique used in local Bhutanese architecture.

"There are two building materials that have traditionally been used in Bhutan: one is stone and the other other is a rammed mud," Hill explains.

"Just before we arrived in Bhutan there was a major earthquake. Responsibly, we couldn't build hotels in that manner. But of course, you can do stabilised earth, which is earthquake resistant."

Hill used local craftspeople to construct the buildings, bringing them to Australia to train them up in how to use the stabilised earth technique.

"The material tradition has remained in place," he says. "It's a structurally worthy replacement for it."

Hill founded his practice Kerry Hill Architects in Singapore in 1979. It currently operates out of two offices in Singapore and Perth, Australia.

This movie was produced by Dezeen for AHEAD. It was filmed at COO boutique hostel and bistro. All photography is courtesy of Kerry Hill Architects, unless stated otherwise. 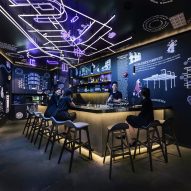