RIBA International Week, which takes place from 3 to 7 July 2017, is a programme of events and keynote speeches exploring the New Urban Agenda – the United Nations' global strategy for sustainable development and housing over the coming two decades.

The centrepiece of the week will be a day-long conference on 4 July, opened by a keynote speech about the United Nations' agenda by RIBA Royal Gold Medalist, former mayor of Barcelona and current executive director of UN-Habitat Dr Joan Clos.

The conference's morning talks will look at the topic from the perspective of architects and also a mayoral, planning and urbanist standpoint.

The afternoon session will focus on international case studies around three core areas from the New Urban Agenda where architects can contribute: social cohesion, housing and cultural heritage. 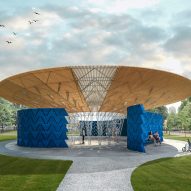 The RIBA International conference is a ticketed event. Tickets can be purchased at www.architecture.com/internationalweek.

Other events in the RIBA International Week programme include an exhibition called Beyond Borders featuring a series of site-specific architectural installations.

The week will kick off with a RIBA Late event on Monday 3 July at RIBA in London, where visitors will be able to explore the installations as well as take in films, lives performance and DJs.

The call for entries for the second RIBA International Prize, which recognises the best new international civic building, will be launched on Tuesday 4 July, and there will also be a series of masterclasses for architecture students, culminating in a student charrette and a series of manifestos on city-making on Wednesday 5 July.

RIBA International Week will conclude with the Ambassadors' Debate on Thursday 6 July, which will involve each of the RIBA president's ambassadors sharing proposals on their area of expertise – from ethics and diversity to technology and sustainability.

Visit www.architecture.com/internationalweek for the full programme of events and to purchase tickets for the RIBA International conference.

RIBA International Conference: Change in the City: opportunities for architects in the New Urban Agenda