Dezeen is visiting the Massachusetts Institute of Technology for the Being Material conference this week. Here's a look at some of the best architecture at the campus, from Frank Gehry's library to Eero Saarinen's chapel.

Located in Cambridge, just across the Charles River from Boston, the current MIT campus first opened in 1916 and covers a 168-acre (68-hectare) parcel of land.

Over the years, some of the world's best-known architects have contributed buildings across the site, ranging in styles including neoclassical, modernist, brutalist, and deconstructivist.

MIT's Being Material symposium takes place 21-22 April 2017 in the university's art deco Morris and Sophie Chang building, but we've chosen to highlight 10 other buildings on the campus that we feel have more visual impact:

Also known as Buildings 3, 4 and 10, this set of neoclassical structures forms a U around the grassy Killian Court facing the river. They were built as part of Bosworth's original plan for the Cambridge campus.

The central Building 10 has a colonnaded facade and is topped with a Great Dome – modelled on the roof of the Low Memorial Library at Columbia University in New York, which is in turn based on the dome of the ancient Pantheon in Rome.

An undulating brick facade affords views over the Charles River for most of the students residing in this co-ed dormitory block.

The building is surrounded by a small moat, which reflects light into the interior through hidden windows close to the water's surface.

In the same year as his chapel, Saarinen also finished a strikingly different structure just a few metres away. The Kresge Auditorium has a leaf-like domed roof that is exactly one-eighth of a sphere, covering a large auditorium and a small theatre.

Glass curtain walls run along the two sides of the three-storey building, which was intended as a meeting hall for the university.

An MIT alumnus, IM Pei has designed a series of facilities for the university, as well as the masterplan for its southeast corner. But the 21-storey Green Building that towers over the campus is the most distinct.

The architect sneakily worked around the limit of 18 floors per building by raising the concrete structure on thick stilts, and designing ceiling heights that were taller than usual. It remains the only tall educational building on campus.

Brutalism was chosen for the style of the Hermann Building, resulting in a top-heavy concrete form that angles out from a primarily glazed ground floor.

Renovated in 2009, the building was originally the work of Argentinian architect Eduardo Catalano – best known for his parabolic-roofed Raleigh House in North Carolina. It sits at the east end of the campus and houses the Dewey Library.

Saarinen was originally supposed to design this student activity centre, but was ousted in favour of Catalano.

Easily identifiable as "a Gehry" for its sculptural crinkled form, this complex includes research facilities, classrooms and a large auditorium, along with fitness facilities and a childcare centre.

The American architect alternated the facade materials between shiny metal and red brick. Zigzagging metal canopies denote entrances along Vassar Street, and drum-shaped sections on the other side – facing an amphitheatre – are coloured yellow.

MIT sued Gehry and the construction companies over failures in the design and negligence, but settled the lawsuit in 2007 after the issues were deemed resolved.

Nicknamed The Sponge after its porous-looking facades, this halls of residence accommodates 350 rooms for freshman students. It was commissioned in 1999 when MIT ruled that all freshman must live on-campus, following an alcohol-related death of a student.

The 10-storey structure by American architect Steven Holl is built from reinforced concrete, featuring cutouts from its cuboid form that create terraces and clad with pre-cast panels punctured by 5,538 two-foot-square windows.

The six-storey structure has approximately 163,000 square feet of laboratory, office, and meeting space, as well as a cafe with views across to Boston on the top floor. 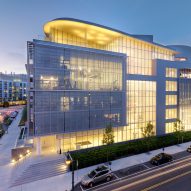