Skidmore Owings & Merrill has unveiled its vision for One Bangkok: a new district in the centre of the Thai city made up of a family skyscrapers interspersed with green spaces.

One Bangkok will provide extensive residential, hotel, retail, office and public space for an estimated 60,000 people once the district is complete in 2025.

The design by Chicago-based architects SOM will integrate a variety of outdoor spaces in an attempt to establish a sense of community in their vision for the "vertical village".

The practice has placed an emphasis on the ecological features of the buildings, which include a plant-covered skyscraper and a sky garden.

Eight hectares of outdoor space set among the towers will "promote well-being in a dense urban environment, [forming] a new centre of social life in the city", according to the architects.

"Bangkok is one of the world’s most dynamic, energetic cities, with an exceptionally vibrant street life," said SOM partner Scott Duncan.

"Our vision for One Bangkok seeks to capture that energy, extending the vitality of the city's streets through the district and then upward, weaving green, outdoor spaces into the fabric of the towers as they rise," he added.

"Inside and out, places for collaboration, socialising, and relaxation cultivate community in a vertical environment."

The site adjoins Lumpini Park, a parkland developed in the 1920s by King Rama VI and named after the birthplace of the Buddha in Nepal.

The 57 hectare park is a centre for outdoor leisure activities in the city, with 2.5 kilometres of paths for walking, running and cycling.

One Bangkok is the first project in Thailand to target a LEED certification of Platinum – a US sustainability rating system.

The architecture and landscape in SOM'S design respond to Bangkok's tropical climate and ecology, using sustainable technologies to reduce consumption and water use and help achieve this rating. 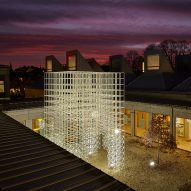 North American architectural, urban planning, and engineering firm SOM, which was founded in 1936, came in at 119 on the Dezeen Hot List.

Among the studio's past projects is a masterplan for a 70-hectares district around Philadelphia's 30th Street Station, which is currently the third busiest in the US and projected to see a further increase in transit activity.