Defunct Romanian watch brand Optimef has been revived by two young entrepreneurs, who are reintroducing the iconic Communist-era marque with the launch of a retro timepiece.

Rather than remaking the original Optimef, founders Andrei Morariu and Bogdan Costea decided to create a contemporary watch that references the Memphis Group with primary colours and simple graphics.

"We took the functionality of 60s modernism and combined it with the playfulness of the 70s and 80s," the brand told Dezeen. "We aim to create designs that inspire a melange of clean minimalism and Memphis Group-like quirkiness."

The watch uses primary colours for the hour, minute and second hand, contrasted with a white or black dial and black silicone strap. It carries a Japanese quartz movement.

The original Optimef timepiece fell out of production in the 90s, when the state-owned factory that produced it became defunct after the fall of Romania's communist government.

"We asked ourselves, whatever happened to the once-productive Romanian watch industry?" they said. "There used to be one, and it was capable of creating quality products that were in tune with the aesthetics of the time."

The Fărăzece timepiece is named after the way Romanians tell the time, by presuming the person asking already knows the hour but wants exact minutes. The answer to the question "cât e ceasul?" (what's the time?) is "fără zece" – which translates as "it's ten to".

On the watch, a zero marks 12 o'clock, and the wearer tracks the minutes as they pass the hour in five minute increments. After reaching the half past mark, the numerals begin to count forward to the next hour. 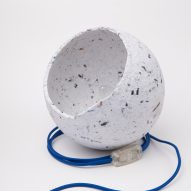 Romanian design is on the rise – young designers told Dezeen this year that their "clumsy, simple but honest" furniture is ready for the world stage.

Optimef watches are currently designed in Romania and assembled in China, but the brand hopes to move towards local manufacturing.