Following on from Balenciaga's recent take on the IKEA Frakta bag, Los Angeles fashion brands Pleasures and Chinatown Market have made a baseball hat from the 40p tote.

The Fraka hat is made from the Swedish furniture giant's iconic blue bags, which have been deconstructed and put back together to form a baseball cap.

The brands used the bag's crinkly material to create the hat's six panels and peak, and wrapped the bag straps – emblazoned with the IKEA logo – around its circumference for decoration.

IKEA is yet to respond to the latest iteration of its iconic design, but it took the news of Balenciaga's copycat tote surprisingly well, saying it was "extremely flattered" by the comparison.

The company went on to release a tongue-in-cheek guide to help customers differentiate the 40p tote from its significantly more expensive counterpart – something Pleasures and Chinatown Market have recreated to market the Fraka hat.

HOW TO IDENTIFY AN ORIGINAL FRAKA CAP: A CONCEPT BY @PLEASURES.NOW & CHINATOWN MARKET AVAILABLE SOON.

Both ads advise customers to look for telltale signs that their product is "an original Frakta". This includes instructions like wear it to see if it wrinkles, and throw it in the dirt to see if it can be rinsed off with a gardening hose.

IKEA's Frakta bags are experiencing a surge of interest of late. They were originally designed by two of the company's longest-standing employees – siblings Marianne and Knut Hagberg. 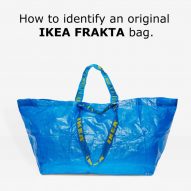 Last year, Danish design brand Hay redesigned the iconic blue and yellow bag as part of a collaboration with the Swedish furniture giant.