Over the last few months we've been publishing short movies about shape-shifting architecture on our Facebook page. Here are 10 of the best, including projects with sliding walls, kinetic facades and rotating rooms.

This conceptual "transformer building" was designed by Californian architecture firm amphibianArc as an exhibition space for a Chinese machinery company. It features a facade that flaps like the wings of a huge insect.

A drawbridge provides access to this angular house, which is perched on a hillside in southern Poland. It also features sliding concrete panels that can conceal its interiors or allow light to flood in.

Find out more about Konieczny's Ark ›

This concept for a shape-shifting house involves a structure that can morph into different alterations in response to changing times of day, seasons and weather conditions.

Find out more about The Dynamic D*Haus ›

Foster + Partners recently completed this Apple Store in Dubai. It features a large bay window based on a traditional Arabic mashrabiya, shading the shop floor during the day but opening at night to views of the Burj Khalifa.

One Ocean Pavilion by Soma

Created for South Korea's Expo in 2012, this pavilion by Soma has a kinetic facade made up of glass-fibre-reinforced polymers, which open and close individually to create a rippling effect.

Find out more about One Ocean ›

Rather than having a moving facade, this temporary house was balanced on a pole, and rotated and inclined. Its positions were defined by the movements of its occupants, who occupied the building for a week as a social experiment.

Find out more about ReActor House ›

The dynamic facade of this office building retracts in response to the weather, acting as a personalised sunscreen for users so they can customise their workspaces.

This video produced by architecture student Tyler Short shows an alternative to the traditional window shade – mechanical louvres that move in three dimensions to adapt to sunlight at different times of the day. With over 5.5 million views, it's our most popular Facebook movie to date.

This adaptable shed in Eindhoven features timber and glass walls that slide along runners to reveal or enclose the interior. It was designed and built by amateur Caspar Schols as a hobby space for his mother.

Find out more about Garden House ›

An animated grid of motorised nodes creates a wall that appears to breathe in and out in this installation created for the 2014 Venice Architecture Biennale, by German studio Barkow Leibinger.

Find out more about Kinetic Wall › 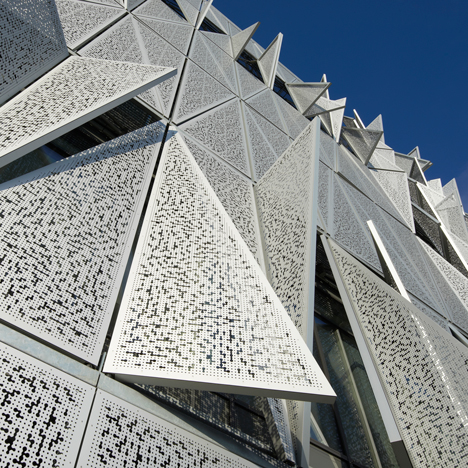