A drawbridge provides access to this angular house perched on a hillside in southern Poland, which architect Robert Konieczny designed to close up completely when not in use.

The architect behind the 2016 World Building of the Year – a museum that emerges from a public square in the city of Szczecin – designed the Konieczny's Ark house for his own family.

The main objective of the project was to make the most of the spectacular view, which led Konieczny to propose a single-storey dwelling incorporating a glazed facade that frames the landscape.

Concerns about the security of the building on this isolated plot prompted the architect to integrate some unusual security measures into the design.

The building pivots away from the slope so that an area accommodating the bedrooms is elevated to first-floor height. Only a corner containing the entrance rests on the hillside.

This corner incorporates a drawbridge which, along with a sliding wall, can completely conceal the full-height windows and narrow deck along this side of the building.

The use of the drawbridge and sliding panels to ensure maximum security recalls Konieczny's design for a fortress-like property near Warsaw called the Safe House.

Lifting the building off the hillside also limits potential damage by landslides and allows rainwater runoff to funnel underneath, lending it a boat-like quality.

This solution required the house to be perched on three supporting walls, which are hidden behind angled surfaces that echo the shape of the roof.

"To give rigidity to the building, the walls were tensed by the planes of the 'inverted' roof, which is slightly raised above the ground," explained Konieczny.

"Their incline increased the feeling of security. We basically created a house with two roofs that protect it from water, and so it began to resemble an ark floating over the fields."

The gabled roof was required by local planning regulations and lends the building an agricultural aesthetic appropriate to its context.

Structural concrete is used for all of the facades to reduce costs, while the roof is covered with a waterproof membrane that looks just like the concrete and gives the building a homogenous feel.

Spray-on insulating foam was applied to all the internal surfaces to ensure the interior remains warm. The material is left exposed in some of the rooms to add a tactile quality to walls and ceilings.

The house's position within a large pasture led the architect to minimise any landscaping that would disrupt the grazing of farm animals, which are able to use the building for shelter from the weather.

Lighting integrated at the base of the house illuminates it from below, accentuating its floating feeling. A second drawbridge incorporated into the underside of the soffit provides access to a basement where a lawnmower and other equipment is stored.

Konieczny's previous residential work has also included a house with a dramatic gabled cantilever supported by a mirrored podium. 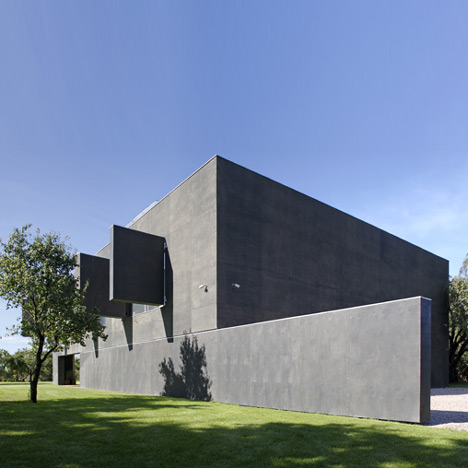