London designer John Booth has created three-dimensional versions of his colourful illustrations for this collection of collage-style vases.

The Tributes collection, which Booth named after Asha's 1990 rave track JJ Tribute – one of his brother's old favourites – encompasses 10 vases of different sizes.

Each piece is handmade by the Cumbria-born designer in his Hackney studio. Here, he handrolls clay slabs before cutting out the face shapes using a paper template.

After a bisque firing, the colourful, abstract facial details are then painted onto the vessel and clear glazed.

But it's these illustrative drawings that are always the first step for Booth, whose practice spans two- and three-dimensional forms.

"It's like I want to design stuff, but it's always led by the drawings," he told Dezeen. "As time's gone on I realised I liked drawing a mixture of things."

"I'll do a drawing of a sofa, or of a shelving unit or a vase – then I think it's fun to do work out if I can actually make it."

The designer, who launched the collection this week at 77 Broadway Market, studied fashion print at London's Central Saint Martins – something he says heavily influenced his collage-style work.

"On my fashion degree I spent a lot of time in the print room dying fabrics and figuring out different ways to print onto them," he said. "I think because of this I like using a mixture of materials."

After he graduated from Central Saint Martins in 2009, Booth went on to teach there as well as at Westminster. He's also worked alongside fashion brands Ashish, John Galliano, Zandra Rhodes and Christopher Shannon. 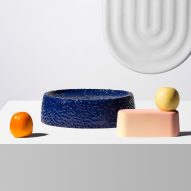 Most recently, he collaborated with fashion brand Fendi to create hand-drawn accessories and garments and has since become known for this abstract style and bold use of colour.

"I really enjoy colour combinations, and I'm keen for stuff to be done by hand," he said. "I don't work digitally at all."