The Outlines exhibition is taking place in The Future Perfect's new secret showroom, adjoining its offices, as part of this year's NYCxDesign festival.

The space is laid out as an open-plan living, dining and bedroom to showcase her lighting and soft furnishings, along with furniture by Portuguese brand De La Espada and dramatic sculptures by Leilani's husband, designer Karl Zahn.

Leilani's bold LED lights are based on traditional architectural forms, with one following the outline of a doorway in the living area.

Another is suspended from the ceiling shapes a long barrel vault above the long light wooden dining room table.

The traditional cloister vaults – a vault made up of four concave sides – found in New York's City Hall informed the third light above the bed.

"I usually build architectural detailing into a space that I do so we do recess wallpaper and lightbulbs or recess cone lighting, or a lot of panel work or detailing," she told Dezeen.

"But for clients who aren't able to do that in their space it's nice to drop in something like this, it adds a nice architectural detailing without it being a full renovation."

Karl based his hanging sculptures on mimic plant forms, like his huge modular lights currently on show as part of Lindsey Adelman's exhibition.

One features bent metal leaves that are joined by chain links, while metals section overlap to create an upwards curve in another. His smaller-scale standing sculptures are made up of long lines that also extend upwards.

"There's a theme of organic or plant life, the Lindsey Adelman piece was inspired by that little burrows tail plant," Karl told Dezeen. "These kind of continue that like linkages and organic shape but in these hanging sculptures."

He also experimented with dichromate – a thin protective covering to the metal – to add an iridescent finish to some of the pieces.

Others are painted black and white to complement the neutral backdrop, which also forms a setting for De La Espada's range of designs by Neri&Hu, Matthew Hilton, Luca Nichetto and Studioilse.

The furniture is arranged according to its shape and predominantly shown in lighter tones.

"We think of it in shapes and for us when we start sketching out spaces we think you need this kind of shape here."

She also created fold-out cushions and roll-mats, named The Cyl (Cylinder) and Pyr (Pyramid) Floor Pillows, as a reference to futons from her childhood.

Other highlights include patterned curtains based on floral arrangements by New York City-based Brrch, which line windows. The scene was hand-painted by Karl's sister, artist Natalya Zahn.

The De La Espada furniture pieces, Karl Zahn sculptures, and For Reference's debut lighting and soft goods collections, are all available exclusively through The Future Perfect.

Visits to Outlines are available upon request at The Future Perfect's main gallery located at 55 Great Jones St, New York, which is currently exhibiting a furniture collection by Rooms based on Soviet architecture in Georgia and alchemy. 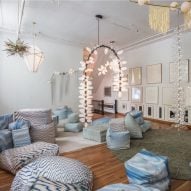