Swedish designer Jonas Wagell's collection of simple home products for From the Bay includes tables with propellor-shaped bases and a bulbous lamp that can be carried by a thin black handle.

The range of items includes furniture, lighting and homeware, and was showcased by the design brand at the International Contemporary Furniture Fair (ICFF) in New York this week.

Wagell, who has also designed for Danish brands included Menu, Muuto and Normann Copenhagen, used a similarly minimal aesthetic to expand on the series of pieces first debuted in 2016

The first lamp in the collection is a floor or table model named Wander, which comprises a translucent shade shaped like a squashed sphere.

The misshapen ball sits on three small black legs, and has a matching handle that loops over the top of the light so it can be moved from place to place.

"Wander takes inspiration from rice paper lanterns of the Orient, yet it has a minimal, contemporary design made of elemental materials, steel and glass," said Wagell.

Another lighting design called Nightfall has a spun-aluminium pendant shade that allows its glass globe to peek out below.

Also new for 2017 is the set of Soft Shelves, which feature gently curved edges and folded sections that sit flat against the wall.

From the Bay also presented Wagell's designs from last year, including the Propellor Tables with three-pronged bases that remind of early aircraft rotors.

The designer's Pin Bowls held up by tiny legs, Bay Chairs made from ash plywood veneer shells, and set of three different-sized Pool Mirrors were shown as well.

The majority of the products come in a range complimentary colours and finishes, so they can be used together.

Wagell set up his Stockholm studio in 2008, and also practices architecture, with building projects including 15-square-metre house that can be built in a weekend.

ICFF took place at the Jacob K Javits Convention Center on Manhattan's West Side from 21 to 24 May 2017. The event's awards programme this year recognised designs for Alzheimer's and a blue foam booth among 12 winners. 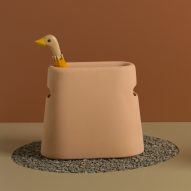