Each product is made with a different material and production technique – including glass-blowing, terracotta casting and weaving – to create the eclectic range.

The Canadian designer, whose previous products include a minimal glass smoking pipe, chose to mould the container from terracotta clay because it will naturally absorb water that drips from wet umbrellas.

Brooklyn-based product designer Sam Anderson referenced the style of the Bauhaus – the German design school famous for its modernist approach – for the Falling Line Rugs series.

The hand-woven coloured rugs are decorated by thin lines that intersect with blocks.

New York studio Visibility's Cabin Pendant series comprises three shapes that vary in the size of the bottom. The form of the pendant lights is based on the cabin located in the nose of a space shuttle.

Frosted glass shades offers a diffused light, while a stronger beam of light is available from an opening in the underside. The glass comes in white or the shade of pink that dominated Milan design week earlier this year.

The set of Pearl Tables by New York design studio Chen Chen & Kai Williams includes wooden tables with rounded tops and an iridescent covering over the holes, made by the structural bolts.

The tables come in three different sizes and are available in either plain wood or a black finish.

Toronto-based MSDS Studio named its 6063 Stool after the pure aluminium alloy from which it is made. The base features four vertical supports encircled by a loop.

This also forms the stopper when the stools, which come in black, green or a red hue, are stacked.

Wolfond founded Good Thing in 2014. Earlier this year, the brand launched seven everyday tools for the home, including a dustpan and a tray with crinkled corners, and a torch charged via USB feature.

The annual fair coincides with the city-wide NYCxDesign festival, which also runs up to 24 May 2017. 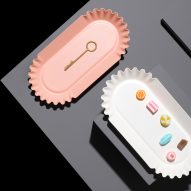 Photography is by Charlie Schuck. Styling is by Natasha Felker.