Bower added two designs to its collection of graphic mirrors, which feature sections of textured black glass placed to allude to 3D shapes.

The first is Slump, which curves at the bottom as if resting its weight on a surface below, while Bump has a section that deviates from its otherwise rectangular shape. Both are held within steam-bent walnut frames.

Earlier pieces in the series include a design that could be mistaken for an arched doorway, and another that looks like a gold ring, as well as simple circular and semi-circular models.

This year Bower introduced a lighting range called C, which is typified by C-shaped elements that hold a spherical bulb at the end of each arm.

Sconce, floor, and two pendant versions are available, all with thin black stems. Minimal lighting was also presented at the fair by Swedish designer Jonas Wagell, as part of his collection for From the Bay.

Also on show were Bower's semi-cylindrical Contour side tables with pink-tinted glass tops, which were previously one of Dezeen's picks from the Sight Unseen Offsite exhibition in 2015.

The studio's ICFF booth was constructed as a maze-like series of small, interconnected rooms, styled with plush carpets and floral arrangements.

The event, also known as the International Contemporary Furniture Fair, took place from 21 to 24 May 2017 as part of the city's NYCxDesign festival.

Award winners at the trade show included designs for Alzheimer's sufferers and a blue foam booth. 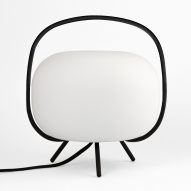 Jonas Wagell adds to minimal product line for From the Bay