Called the Los Wixarika collection, the four designs were debuted at Clerkenwell Design Week's Platform exhibition – a show dedicated to emerging talent that was located in the area's subterranean House of Detention.

The jewellery boxes feature bold motifs inspired by the religious beliefs of the Huichol people – also known as Wixáritari – which is a native community living in the Sierra Madre Occidental in Mexico.

The folk art and handcrafts produced by the Huichol people is known as Wixárika art, and Tropel's collection was developed in collaboration with Maurilio Renteria – an artist who works within this practice.

"The shapes were taken from the Wixarika culture and transformed into Tropel aesthetics," said Tropel founder, Ana Jimenez Palomar, "The finishing applications of yarn and beads were done by the artist Maurilio, guided by his religious iconography."

Made using traditional techniques, two different shapes or "characters" are used as frontages, and are mounted on a simple set of two timber drawers.

Based upon the form of the Peyote, a plant used in Wixarika ceremonial acts, the bloom-shaped Hikuri jewellery boxes were made by fixing small brightly coloured beads into wax and resin.

Meanwhile, the two Maxa jewellery boxes, made by pressing yarn into boards coated with wax and resin, feature antler-like arms and legs with hooves that evoke the Wixarika religion's Deer God.

Palomar launched the Tropel brand in 2016 following the launch of her eponymous studio Ana JP Design in 2014. It is dedicated exclusively to the production of jewellery boxes - the design of which stem from a furniture collection she created for her Master's degree at Central Saint Martins back in 2014.

She says that the work of Tropel is focused on "challenging and then bridging perceptions of traditional extravagant Mexican cultures."

At Clerkenwell Design Week, Tropel's Los Wixarika collection was exhibited alongside the work of ten other designers on the stand of new emerging talent platform, Trouping Colour. Curated by Simon Fraser, a creative director, designer, strategist and director of ultra-indigo, Trouping Colour brings together young designers in order to exhibit their work at high profile venues. 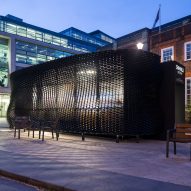 Take a tour of Clerkenwell Design Week's installations and exhibitions

Also on show during Clerkenwell Design Week, the winning entry plus eight runners-up from Dezeen's Brexit passport design competition were on display at the London showroom of Italian furniture brand Arper, while London designer Giles Miller worked with watch brand Shinola to create a pavilion made from 8,000 lightning-bolt-shaped pieces of plywood.