First unveiled in late 2015, the two-storey, 14,000-square-foot (4,300 square metres) building will create a major gallery for the US charity, which boasts a collection of over 800 pieces of contemporary art.

It will feature a striking red concrete exterior, created using panels of red-toned precast concrete that will shimmer in the light, thanks to an aggregate of glass and mica.

David Adjaye's design is based on a sketch of a red building made by the late philanthropist and charity founder Linda Pace, after she saw one in her sleep. Called Ruby City, the museum will also feature a jagged roofline and a cantilevered structure.

Construction started on 31 May 2017. It is expected to complete in 2018 to coincide with a year of celebrations for the city's 300th birthday, although it won't officially open to the public before 2019.

According to Rick R Moore, president of the foundation, the building will create a "functional symbol" of San Antonio's ongoing love affair with the arts.

"San Antonio has long been a destination for art aficionados and creators alike, and Linda Pace Foundation was created to bolster that legacy through its collections, programmes and public spaces," he said.

A new series of renderings has been released to accompany the news, revealing more details about the design.

The building's concrete body will be punctured a series of strategically placed windows that offer views out to a a neighbouring park and the San Pedro Creek beyond.

Skylights will be dotted across the building's angular roof, creating dramatic, top-lit galleries inside. There will also be a grand staircase connecting the various exhibition spaces, while a sculpture garden will surround the building.

Ruby City is expected to cost $16 million (£10 million) and will be entirely funded by the foundation.

It is among a series of US commissions for London-based Adjaye, who has just completed one of the most important projects of his career, the Smithsonian National Museum of African American History and Culture in Washington DC.

The architect – who ranked at number 41 on the inaugural Dezeen Hot List – is also working on a 61-storey skyscraper for New York, the revival of San Francisco's shipyard and a new home for Harlem's Studio Museum, also in New York.

He was just named world's most influential architect by Time magazine. 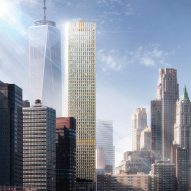 "When I visited San Antonio in 2007, and met with Linda, we sketched out ideas and together we envisioned a building that would resonate with her dream of the Ruby City," said the architect, speaking back in 2015.

"Like a city, the design offers an organic, heuristic encounter with the Foundation's works and my hope is that it will become a place where artists and the wider community can be inspired to realise their own dreams through a meaningful experience with contemporary art."