IKEA's blue bag is the perfect pop-culture reference for a generation stuck in a rotation of rental flats, says Will Wiles in his latest Opinion column.

IKEA's blue Frakta bag is having a fashion moment. It used to be that, once you'd used it to carry home your inexpensive kitchenware, IKEA's masterpiece in blue polypropylene became very handy for lugging about the laundry. But things have changed.

Ever since Balenciaga unveiled a large leather shoulder bag that bears an unmistakeable resemblance to the furniture giant's durable plastic carrier, it has taken on a third life as a source of fashion cachet. Homages have spread across the internet like a rash. There are Frakta baseball caps, face masks, watch straps, backpacks and even thongs (ouch).

I call this type of design "popcorn". Rooted in the pop-culture or nostalgia tastes of the moment, it is made solely for the purpose of driving clicks online and generating publicity for the maker. Films, box sets and computer games become endlessly remixed through a relatively small set of classic design languages. Breaking Bad episodes as Penguin books covers. Mad Men as a Tube map. Guardians of the Galaxy as if it had been designed by Saul Bass. And so on.

There is nothing wrong with popcorn, other than its tendency to dominate some forums. (You really shouldn't eat nothing but popcorn.) And it is valuable to keep an eye on popcorn, because it reveals what cultural products have had real traction among designers.

Many of the Frakta products are real and available for sale. But they are the tiny commercial nucleus of a far vaster orbiting whirl of attention and social-media circulation. The Frakta has broken through into design consciousness.

There's a long history of showy re-use of humble materials in fashion. That primal hipster accessory the Freitag messenger bag, made from the weatherproof coverings of lorries, springs to mind. Freitag was also an early adopter of the now-everywhere use of shipping containers as a boutique storefront. But the Freitag bag made a great deal of sense. A messenger bag should be tough and impervious to rain, so lorry tarps are perfect. Bag and material shared the imagery of transportation, and the tarps gave a fashion brand a dose of urban grit. It was all a symbolic match.

By contrast, Frakta trainers are a jarring mismatch. The blue polypropylene is tough, but it's better at carrying clothes than making them, a dissonance taken to extremes by the thong. It's a joke, of course, as most all of the Frakta remixes are to a greater or lesser extent – it's irony. So why all the ironic announcements? Why now?

The fact that it's IKEA is, of course, critical. No other design brand combines its cultural product with general accessibility. And while ubiquity doesn't neatly overlap with love, IKEA does inspire a great deal of affection and loyalty. IKEA furniture is often the first thing people buy for themselves when they set up their own home.

While ubiquity doesn't neatly overlap with love, IKEA does inspire a great deal of affection and loyalty

The brand also benefits from the much-observed tendency of consumers to be more attached to something that they have had a hand in making themselves, even only at the stage of final assembly. In fact, this phenomenon is now so associated with IKEA flat-packs that it is called the "IKEA effect".

However IKEA is also the furniture of the rental flat, the furniture of the landlord. That doesn't invalidate any affection, but it alters and qualifies it. Among 20-something urbanites, IKEA has a profile more like an inescapable but largely benign state agency, rather than a giant corporation. That appears to be a mental space it does not begrudge, exuding an air of genial bureaucratic dependability. And its Swedishness only helps, given the Scandinavian reputation for robust social infrastructure.

IKEA's strength is that it combines relative affordability with a sense of guiding thought. You don't see – say – Argos hacks, because Argos doesn't have the same kind of language that can be borrowed. 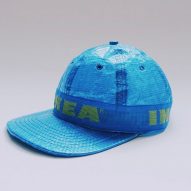 IKEA's blue bag has been reimagined as a $38 baseball hat

This makes IKEA ripe for subversion. Fond subversion, no doubt, but there's a definite suggestion of an eye roll. The ironising of the bag used to hold the ironing passes broader comment on the condition of young people. This is a generation increasingly stuck in a rotation of rental flats, held under the weight of student loan debt (or deterred from university in the first place) and denied the paths to improvement enjoyed by their parents. Meanwhile they are continually lectured by more fortunate, older people as to how their problems are their own making – witness the recent uproar when an Australian real estate millionaire suggested that millennials might be able to afford their own homes if they stopped buying avocado toast.

The message is wearyingly familiar: it's not the disintegration of paid work into unreliable precarity, or the skyrocketing price of homes, that is to blame for the economic stasis of the post-1980 generation, it's their own laziness, vanity and consumer fecklessness. If they could only hold off the flat whites and the trainers, the system would work just great.

IKEA is a boon but one that most people hope is simply a step towards better, more lasting things

Young people are rightly unsympathetic towards this line of critique. IKEA is a boon but one that most people hope is simply a step towards better, more lasting things. The Frakta bag, the mainstay of the shared-housed hallway, makes a very suitable flag for a generation caught in economic and demographic doldrums. The IKEA furniture was meant to be the first furniture you bought, not the only furniture you bought. It's all still here. The Frakta is the temporary object that has become permanent. It came home with that self-assembly desk and it didn't go anywhere. It comes in handy for those moves from rented flat to rented flat.

And the remixes are a way of restating that ghastly, unwanted permanence, of making a point of it: making it even more permanent, twisting it into something desirable, because what better way to appropriate it, to put two fingers up to the sanctimony of the rich and the old, than to make it into fashion items? Woven polyprop is tough and versatile – exactly the qualities today's unfairly maligned 20-somethings display with gusto.