A brick punchbag and a smoke-topped table are among the limited-edition pieces designed by Studio Job for Gufram's new range aimed at the "most demanding collectors".

The objects, which launched yesterday at Design Miami/Basel, are the first in Gufram's spin-off range Supergufram, which focuses solely on collectible pieces.

It features six pieces designed by Studio Job, each of which is available in a limited run of seven.

"Supergufram was born to satisfy the desires of the most demanding collectors, the ones who think Gufram is not enough anymore," said the Italian brand, which was founded in 1966.

"[The range] focuses on limited editions with a series of episodes where the main characters are some of the most visionary designers of our time."

Studio Job founders Job Smeets and Nynke Tynagel – a former couple – have become known for their autobiographical approach to design, and once crafted a coffee table that symbolised their break-up as a head-on collision between two steam trains.

They have created a version of this table for Gufram, named The Steam coffee table, which features a pot-shaped golden base that supports a tabletop appearing as a billowing cloud of smoke.

The Moon cabinet is an extension of a piece that Studio Job first designed for Gufram in 2013, and features a moon placed between the two doors.

"In this new version, the soft central Earth changes its face because we leave our world heading towards other planets landing on a grey moon," said Gufram.

The globe motif that was replaced by the moon for the new cabinet edition has been repurposed for an actual spinning globe, which the brand describes as "playing with the idea of a soft Earth".

A punching bag named Punch My Wall looks to have been built from stacks of red bricks, while the Fence room divider has been textured and coloured to give the appearance of wood.

The arrival of Gufram's new limited-edition range echoes comments made earlier this year by Wendell Castle, who said that buyers are capitalising on the burgeoning market for collectable furniture as prices and popularity continue to increase.

"Prices continue to increase, but when compared to paintings, furniture is still a relative bargain," said Castle, a pioneer of the American studio craft movements.

"The divide between painting and 'design as art' is getting fuzzier and fuzzier," he said. "Museums are now commonly displaying furniture in the painting galleries."

This year's edition of Design Miami/Basel takes place from 13 to 18 June. 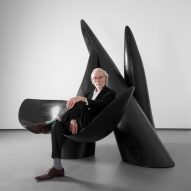