The new Broadway Malyan-designed RIBA North has opened its doors on the Liverpool Waterfront in northern England, with an exhibition of architectural drawings of unbuilt proposals for the city.

The London-based studio created the Mann Island centre as a space for the public to discover more about architecture through an exhibitions, talks and tours programme, and it also hosts a café and shop.

Two low-lying blocks make up the physical structure of the architecture centre – with the volumes set at right angles to face the River Mersey.

RIBA North is the Royal Institute of British Architects' first centre for architecture outside of London, where it is based at 66 Portland Place.

To celebrate the opening of its new location, the centre has orchestrated numerous temporary and permanent exhibitions to coincide with the building's opening.

"With its dynamism and its exceptional setting, Liverpool has always challenged architects to design bold – and sometimes controversial – schemes," said co-curator of the exhibition, Joseph Sharples.

"To see these unbuilt projects gathered together is a reminder that today’s city is the result of countless choices between alternative visions."

Many of the illustrations, dating from the 1700s to the mid 20th-century – including those by Edwin Lutyens, Giles Gilbert Scott and Denys Lasun –have been restored and are on display for the first time, due to a £67,000-grant from the Heritage Lottery Fund.

Visitors can browse the city's unbuilt-proposals, including an Anglican Cathedral by Sir Charles Nicholson and Phillip Webb from 1901, and a visionary reimagining of Liverpool's skyline by Graham Shankland from the 1960s after two thirds of the city's buildings were declared obsolete.

The glazed roofs of the mono-pitched volumes naturally light the exhibition and events spaces – with terraced offices making up the top floor of the sloping structures.

Located at the heart of the centre is City Gallery, a space for visitors to learn about the architectural heritage of Liverpool – as well as its urban development and the construction of its built environment.

Inside the City Gallery, the Digital City Model – an interactive 3D Model –"recounts" stories about Liverpool and the history of its urban evolution.

In another immersive major display, titled Un-Veiled by KHBT Architects, visitors are welcomed through the winter garden, located between the two riverside buildings.

Guests can walk through layers of the red mesh building site material that usually covers scaffolding, which have been cut into the shapes of Liverpool's iconic city buildings, including Imperial War Museum North, York Minster and The Sage in Gateshead.

A permanent cafe and shop – curated by stylist Katie Patrick – stocks merchandise and products from northern designers including ceramics by Sam Andrew and Joe Hartley; textiles by Heather Shields; leather bags by Ruth Pullan and cutlery by David Mellor. 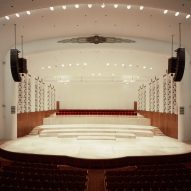 Liverpool(e): Mover, Shaker, Architectural Risk-Taker will be on display from 17 June to 16 September. The centre is open from Tuesday to Saturday from 10am to 5pm.

For job opportunities at RIBA, visit their company profile on Dezeen Jobs.