The range, which was launched during Melbourne's DenFair, pairs porcelain and metal in a series of bars suspended from trapeze-like loops.

The bars are shaped to resemble the movements of aerial performers. There's a back flip, a forward bend created by draping the bar around the supporting pendant, and a lamp with two arms to create the impression of a double act.

The bars of each light feature translucent, glowing porcelain sections.

"It took around two years for it to go from its initial concept through many varied incarnations to the final simple, pared-back design," Porcelain Bear founder Gregory Bonasera told Dezeen.

"The final design took its name because of its similarity to an acrobat on a trapeze," he continued. "Its grace, balance and poise were the essence of an acrobat."

Bonasera set up Porcelain Bear in 2010. The designer studied ceramic design at Monash University in 1988, but focused on creating furniture and lighting from stainless steel after graduation.

In the late 90s Bonasera made a return to ceramics, later launching Porcelain Bear to specialise in porcelain furniture, objects, tiles and lighting.

"Everything we design and create has to have at least an element of porcelain in it," he told Dezeen. "Although it's a difficult medium to work and to master, we have dedicated many years to harnessing its idiosyncrasies."

"Porcelain is 15 per cent harder than glass. It offers a beautiful, warm translucency giving a subtle, delicately diffused light."

The circus has provided a source of inspiration for several other designers. New Zealand brand Resident launched a set of chain-like lamps that resemble the rings used by aerial performers, and Marcel Wanders borrowed from tents, clowns, elephants and strongmen for his Alessi kitchenware range.

Melbourne's Denfair also saw the launch of new furniture and lighting brand Nau, which hopes to kickstart a new Australian design movement by showcasing the work of local designers. 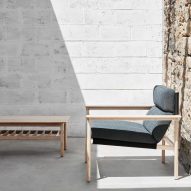