The five figures are limited to 999 pieces and are described by Alessi as "table sculptures". Made from steel plate, each one is named after a fictional circus member invented by Wanders, who is known for his flamboyant aesthetic.

The Strongman, Marcello, is a nutcracker shaped like a strongman performing a weight-lifting feat on top of a small podium. Turning his dumbbells forced his boots down onto the nut, which sits in a dip on the podium.

A corkscrew called The Jester, Gilberto, also sits on a podium, which hides the screw function. Once wound into a cork, the jester's body expands to remove it from the bottle. His hat acts as a handle. 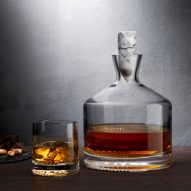 The Ballerina, Valentina, is a baby elephant that pirouettes on a golden ball on top of a music box that plays the classic circus tune The March of the Gladiators by Julius Fučík. A silver mouse is added as her companion in the act.

A dinner bell has been imagined as The Ringleader, Massimo, on a wheeled cart with a silvery monkey at the front and a red-caped top-hatted figure at the back.

A tall sweet dispenser called The Candyman, Alberto, is shaped like the face of a clown with an over-sized top hat. Sweets are dispensed from his tongue.

The pieces are made using a combination of lost-wax casting, machine processing and laser cutting and is decorated by hand, including gilded details like The Strongman's eyebrows and nose.

Among the available patterns are tessellating triangles and diamonds that emulate circus tents and costumes, as well as spots and stripes.

Glass storage jars are decorated with horses around the sides and are topped with peaked lids to resemble a merry-go-round.

"The circus is larger than life," said Wanders, whose previous products for Alessi include the Dressed watch. "The pageantry and astonishment from what you see, hear and feel never leaves you. That one-of-a-kind magical feeling is now celebrated through this innovative collection."

The Circus collection will launch in the UK at luxury department store Harrods this month during the London Design Festival, which runs from 17 to 25 September 2016.

Other products launching during the festival include customisable kitchens and bathrooms by Italian designer Piero Lissoni for Boffi and glassware by designers Joe Doucet and Inga Sempé for Turkish brand Nude.