Royal College of Art graduate Marie Tricaud has designed a set of wearable modules that let live music be performed as "vibration loops and temperature melodies" on your skin.

Touché includes both small plastic pods that attach to the skin, as well as a console that performers can use to build loops, create different types of sensation, and play tracks. Each wearable pad contains its own vibration motor, which offers varying levels of intensity as well as a temperature element.

Tricaud, a graduate of the RCA's Innovation Design Engineering masters programme, drew on her own love of electronic music instruments to design the system, which blends bright colours with hexagonal shapes.

"It's a very novel experience, so I wanted to create something fun, playful and accessible," said the designer, whose home fermentation tool the Brinery – developed alongside other RCA students – was also featured on Dezeen.

"Touché is not about translating audio frequencies into physical vibrations – instead it offers a creative tool for performers and listeners to artistically explore the long-neglected sense of touch."

The wearables can be attached anywhere on the body, in any combination, and provide a network of different stimuli depending on how the console is programmed. Musicians can use Ableton software to synchronise their vibrations to music, and a MIDI keyboard can also be plugged in to control the Touché console.

"The performer will compose, alongside the musician and the visual artist, to create an immersive synaesthetic concert, sending vibration loops and temperature melodies down your spine."

Tricaud intends for Touché to be used in the context of live music, such as festivals and gigs, but believes it could also become a consumer product – "almost like a pair of headphones, but for the skin".

The designer has tested Touché with both listeners and makers of music, and is currently looking for support to develop it further. The current working prototype still relies on wires to connect the pads, but Tricaud hopes to eventually produce a wireless version.

Another wearable system – Vibeat, designed by Liron Gino – was created to give deaf people a chance to experience music through vibration.

Other projects from this year's Royal College of Art (RCA) graduate exhibiton include a set of jelly-like plates that wobble and bounce to change how diners experience food, and a set of packaging designed to make popular podcasts more tactile. The exhibition is on from 24 June to 2 July at the RCA's Kensington campus in London. 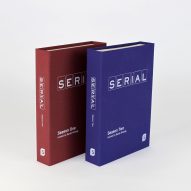 Packaging design for popular podcasts imagines them contained in cans, books and pamphlets