To add tactility to the listening experience, Royal College of Art graduate Seungtae Oh created these packaging designs for podcasts including Serial and 99% Invisible.

Oh's Making Podcast Physical project explores the ways podcasts could go beyond audio-only. It also asks how producers could exploit printed materials as a way of boosting their show's identity.

It taps into the trend for more tangible experiences of sound, which has seen vinyl sales soar in recent years, as well as the ever-growing popularity of podcasting – with 67 million monthly listeners in the US alone.

"Current relations to digital audio content are mainly defined by convenience," said Oh, who created the packaging as part of the Royal College of Art's Design Products masters. "This overlooks the way of how we own, collect and share intriguing content."

Oh tailored the packaging to the content and format of each podcast, choosing Serial, 99% Invisible and It's Your Universe as examples.

For Serial – the investigative journalism series that became the world's most downloaded podcast soon after it premiered with a true crime story in 2014 – Oh created a wraparound cloth book cover to house each season.

Listeners are encouraged to interact with the story further through a series of crime scene-style photographs in envelopes, which also include an RFID tag that lets each episode be played directly.

For 99% Invisible – the design podcast whithatch examines the stories behind objects, infrastructure and buildings – Oh created a set of illustrated pamphlets for each episode.

The cover graphics nod to the content of each episode, and a QR code that's revealed by opening the folder lets listeners play the podcast from their smartphone.

Additional information is also provided in the form of extra photos and booklets. Oh suggests that each pamphlet could be delivered to donating listeners on a monthly basis.

Oh echoed the space theme of It's Your Universe by creating metal spheres, placed inside labelled paint cans, that represent the planets. Each globe is weighted differently, to reflect gravitational force, and episodes can be played directly by scanning the picture of each planet with an image recognition app.

Other recent student packaging projects include a backpack for festival-goers that lets them drink straight from the bag to avoid long bar queues, and a biodegradable alternative to plastic food packets.

Oh's project is on display at the Royal College of Art (RCA) graduate show, on at the school's Kensington campus from 24 June to 2 July 2017. 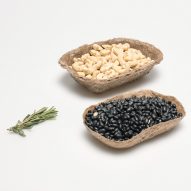