Dezeen promotion: interior architect Tristan Auer has been revealed as the latest Maison&Objet Designer of the Year, and will create a stand that will display his past projects for the September edition of the biannual Paris fair.

Auer, who is from France, was awarded the accolade thanks to his "elegance and French style", which he is expected to showcase at the fair.

"Suggested by perfect architectural features – arches, light hues of white and pastel green, and a few vibrant colours, the concept develops around a selection of symbolic elements," said Maison&Objet.

"A bar in the middle brings an element of fun and elegance, a vintage car symbolises travel, and – to echo his interest in cinema – a series of recesses showing objects in cinematographic compositions."

Auer founded his own practice, Izeu, in 2002, having previously trained under the likes of Christian Liaigre and Philippe Starck.

His work has seen him complete a wide number of projects worldwide, such as the renovation of exclusive hotels, including Les Bains and the Hotel de Crillon in Paris. He has also designed private villas and created showrooms for brands like Cartier, Contardi and Taillardat.

"For Tristan Auer, his job is all about designing an outstanding environment for each project, an interior that sparks emotion and resembles its users – as opposed to reproducing one successful recipe," said the fair organisers.

"Underlining that is his desire to design a variety of atmospheres, each offering a distinct experience, depending on his mood and whim. Interiors where people can create their own lives."

The September edition of Maison&Objet takes place from 8 til 12 September 2017, coinciding with Paris Design Week, for which Dezeen is media partner.

Maison&Objet names a Designer of the Year for both the January and September fairs. These are typically in keeping with the specific focuses each of the two shows – a product or industrial designer for January, and a designer more recognised for their work in interiors for September.

French designer Pierre Charpin was the last recipient of the award, which he received earlier this year.

Other past Designers of the Year include Japanese studio Nendo, which created a chocolate-themed lounge area, and British designer Ilse Crawford, who created a space to help visitors to the fair "relax, collapse, recharge, recap, reconnect, regroup and refresh". 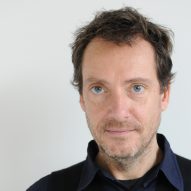