British architect David Chipperfield has claimed the UK's departure from the European Union will further erode city planning regulations at a time when they are needed most.

"We've completely destroyed the notion of planning. At a point where we need the most planning, the most engagement, we've got the least," he said, speaking at the annual RIBA International Conference last week.

"This is a fundamental problem. I think we're in a sort of crisis. Pandora's Box is open – how do we impose some notion of regulation?"

Chipperfield said the Grenfell Tower disaster, which killed at least 80 people when a fire engulfed the west London building, has brought the discussion around regulation back to the fore.

But he warned that Brexit would bring the erosion of regulation – which provides guidance on issues including safety, environment and social impact – creating a crisis for city planning in the UK.

"The tragedy of the last weeks has at least, amongst the terrible consequences, brought back this discussion of regulation, the importance of regulation at a time when we've had so much populist discussion amongst even politicians, with people like Michael Gove saying 'we're fed up with experts'," he said.

"The erosion of professionals, the erosion of regulation as if it was a foil to enterprise, and the only good thing is to shed," Chipperfield continued

"That's why we're having Brexit by the way, Brexit is an attempt to get out of European regulations because as Anglo-Saxons we don't like regulations. I think this is a crisis for this country. And it's not just about planning."

Chipperfield said that architects have been "emasculating" themselves by failing to seek to influence the city beyond their prescribed plot, leading to an "urban plan without vision".

"In the last 20 or so years we've seen very good architecture. The quality of individual buildings now is higher than it was 30 years ago. We can also say that there's no doubt that as architects we are increasingly emasculating our position and we have retreated from any ambition beyond the red line of our building plot," claimed Chipperfield.

"We are not anymore encouraged to be involved in anything beyond the red lines of our building site. Often in something that's called a masterplan," he continued. "A master plan is an urban plan without vision. It's surreptitiously replaced the notion of urban planning, because urban planning was master planning which carried with it some idea of what a city would look like, some idea of shape."

Chipperfield's views are in direct opposition with developers including Roger Zogolovitch, who believes that regulation often leads to "perverse outcomes", worsening rather than improving the quality of architecture.

Chipperfield made his comments during a discussion on the role of architects in urban planning. He was joined on the panel by architects Amanda Levete, Elizabeth Diller, Ma Yansong and Odile Decq, which was chaired by Sarah Gaventa at RIBA's headquarters in London.

Chipperfield and Levete were both part of a group of high-profile architects who backed the Remain campaign for the UK's EU referendum.

Levete added: "It's not just regulation as you've described – it can be both positive regulation and negative. I think the other thing that we're missing at the moment in the UK is leadership. It's a massive vacuum."

Decq said that Paris was suffering a similar lack of vision in its urban planning.

Ma of Chinese studio MAD continued the discussion in an interview with Dezeen following the panel.

He said architects need to distance themselves from the commercial world, and to find a collective voice to influence some of society's biggest challenges including climate change and urban planning.

"In the past, young, talented architects worked together to form a strong social agenda and communicate with a larger audience. That's what today's architecture community should be," he said.

"We need to be brave and tell the politicians what a better future could be. We need architects to be visionaries."

Chipperfield came in at number 10 on the inaugural Dezeen Hot List – a guide to the industry figures our readers most want to read about. He received a knighthood and the Royal Gold Medal for his contribution to architecture in 2010, and curated the Venice Architecture Biennale in 2012. 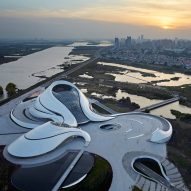